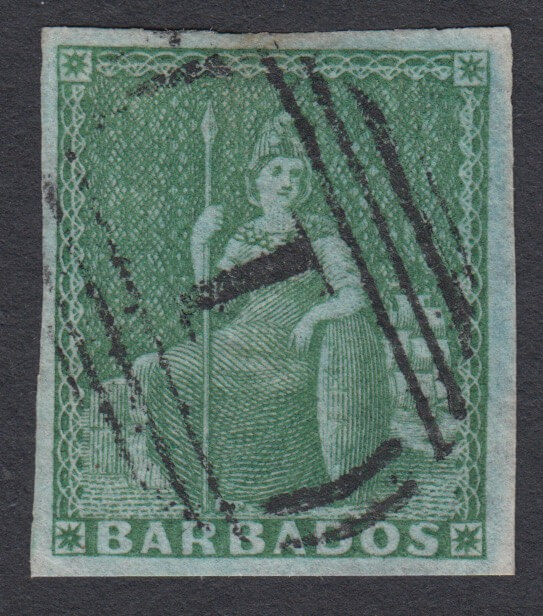 The Barbados Britannia’s were an iconic stamp, in daily use from 1852 until they were replaced by the Victorian keyplate design in 1882. They did their duty for 30 years, being used on all manner of items from newspapers and letters to parcels and packets.

In total, there were over ten million of these stamps printed during that time and with so many watermarks, perforations, colours and denominations it is surely hard to pick just one stamp to be the best ever? Whilst it’s true, the later De La Rue printings had a much nicer range of colours and were far clearer prints, it’s hard to beat the original Perkins Bacon design of this stamp.

As money was tight in the mid 1850’s, the plate for this was also shared between Trinidad and Mauritius so each country has its own Britannia’s with varying colours and complexity.

So, from this bewildering array of stamps with over 30 years of use, how on earth can you pick one for the title of ‘best ever’?

Well, my choice isn’t by chance, it’s built around a range of important factors.

First of all, this stamp I have chosen in Barbados SG1, the very first of the stamps to arrive on the island and be used in 1852.

This particular stamp is possibly from one of the slightly later printings, as it was printed no less than four times between 1852 and 1855. The only ‘evidence’ for this is the colour, which appears to be a slightly darker green than the more usual yellow-green, that it is on ‘blued’ paper, characteristic of these early stamps and the fact that the printing is crisp and clean; not always the case with later Perkins Bacon printings.

Survival rates of these SG1 stamps are incredibly low. Not a single mint example exists anywhere and many of the used copies are in poor condition. The reason for this is that these stamps were issued imperforate and their initial, and possibly only use, was to pay for the cost of sending newspapers across the island. We therefore have a situation where someone was sitting with a pair of scissors, cutting up great sheets of these stamps ready to stick onto the daily newspaper.

Of course, much like today, newspapers are quickly discarded once used and as there were no stamp collectors on Barbados in 1852, no one thought to save them.

Just a few mastheads still survive with the stamp still attached, and of the stamps that have been saved and soaked off, many have irregular margins, have been damaged or cut into or have a heavy obliterator across their face.

This stamp, however, appears to have escaped that fate and has four large clear margins, a clear number one Bridgetown ‘bootheel’ cancel and no obvious damage. Which makes it a rarity amongst rarities.

The final factor, however, which leads me to conclude that this is the best stamp ever, is the fact that it has taken me ten years to find. Sure, it’s not the rarest Barbados stamp, nor the most expensive, but for its quality and the pivotal part it played in the development of postal services not just in Barbados, but across the Caribean, it is for me, the best Barbados stamp ever.

So, whilst there may be others that would claim the title, today I am crowning this particular stamp the best Barbados Britannia ever.

And as a small postscript to this story, which I actually wrote a couple of months ago but have saved for now, in the interim I have sent it away and obtained an RPSL certificate to confirm it really is SG1 and it’s a cracking example.

One thought on “Is this the best ever Barbados Britannia stamp?”