Flaws on stamps have long been an area of interest for collectors, with some of the more famous Commonwealth flaws now commanding extremely high prices at auction. Barbados Stamps, in line with many other Commonwealth countries have a rich catalogue of flaws on stamps which cover four reigns.

Looking through the Stanley Gibbons catalogue the majority, if not all of the flaws during Victoria and George V are attributable to errors in watermarks, being inverted, reversed or elements missing. It isn’t until the 1935 Jubilee Series that the first ‘constant flaws’ which are easily seen on the stamps appear in the catalogue.

As these are the easiest to see this part of the site is dedicated to illustrating wherever possible the visible flaws that we have on stamps in the collection.

Many of the catalogued flaws occur in the George VI stamps and particularly in the the Badge of the Colony series between 1938-47. This has proved to be a rich area for flaws and the following are some of the more obvious ones. 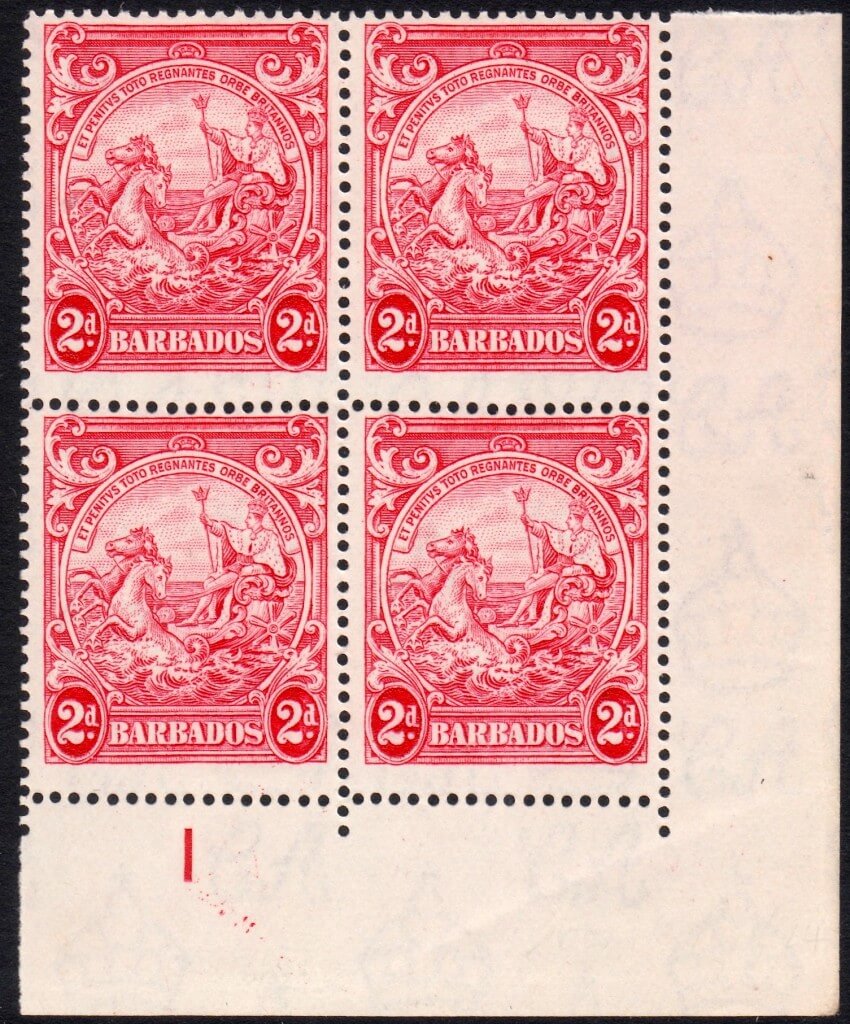 This particular flaw has confused a lot of people as it is not immediately obvious and certainly looking at the block above you could be forgiven for asking ‘what is it’ and ‘where is it’? The flaw actually occurs on the right hand edge of the top left stamp in the block. It manifests itself as an additional line outside the frame of the stamp, which runs down the middle third on the stamp.

It is slightly easier to see in close up here 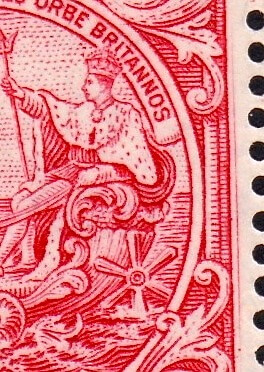 This flaw is only catalogued on the 2 1/2d stamp, both ultramarine and blue and you can see it as a blue vertical line inside the top ornament, although it does appear as a ‘blob’ to the naked eye. Close up however it appears a lot clearer. 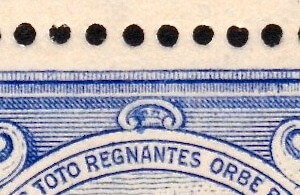 This particular flaw isn’t actually catalogued however it does appear across a number of stamps. The flaw occurs in the shading that is in the top bar, and in this case the top right hand stamp appears to have a white area there where the shading is missing. 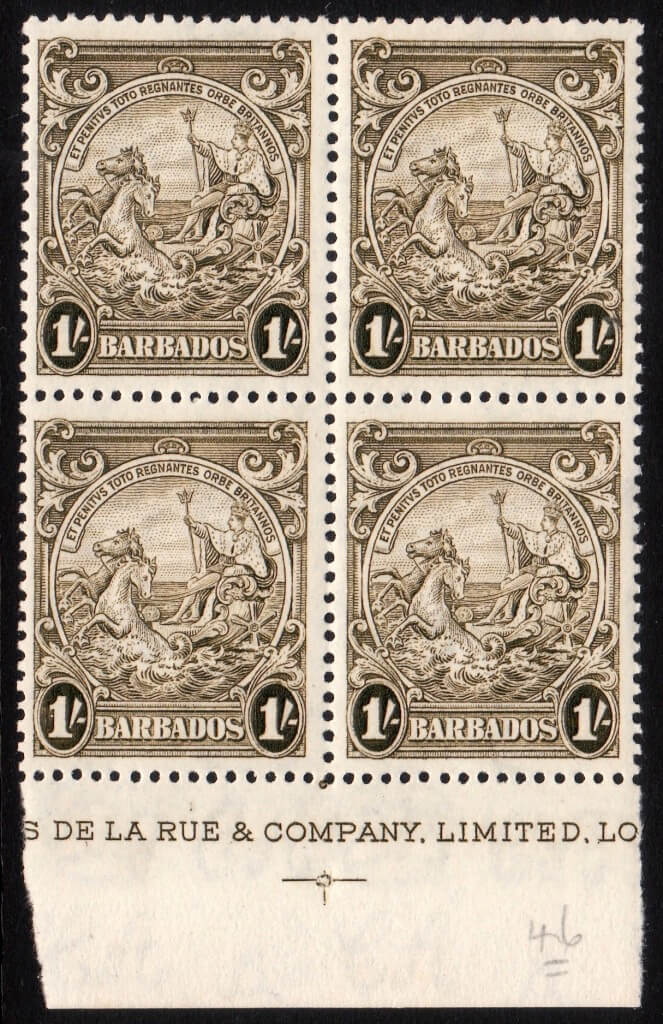 In close up this flaw becomes evident

The flaw occurs across a range of stamps that we have in the collection including SG255 the 1/- stamp shown above, SG248c the 1/2d stamp also shown below. In each case we have seen the missing shading occurs in the top right hand stamp of a block and when these are compared side by side with the others in the block this constant flaw becomes evident. 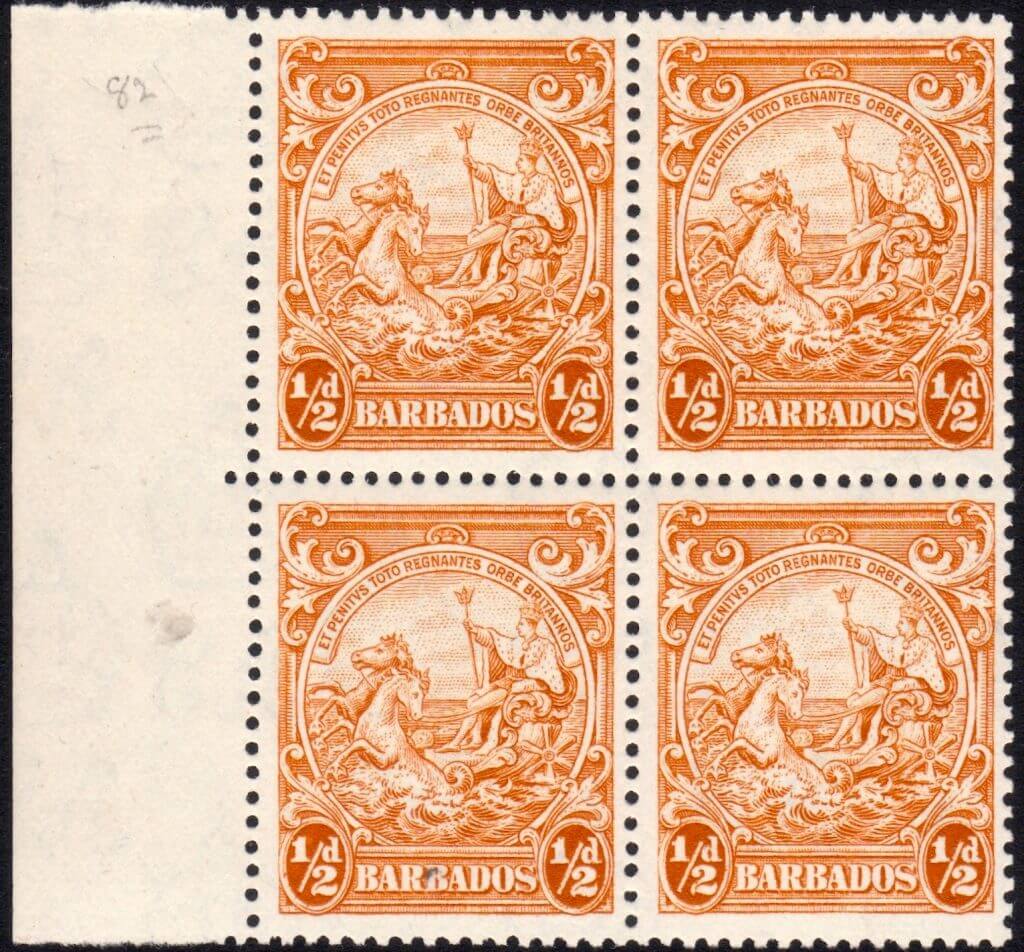 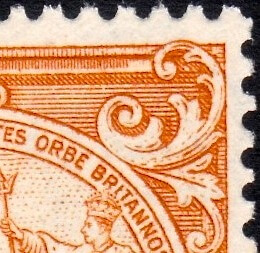 This next flaw is quite rare and one of the few recorded in the QEII stamps from Barbados. In 1975 Barbados issued a reprint of the Orchids series from 1974, the only difference was supposed to be that the watermark was the opposite way round to the first printing, so if it was upright in the first issue it was sideways in the reprint.

There are a couple of recorded inverted watermark errors in this series and indeed we have one in the collection that is not in the catalogue, but the most striking error occurred on the top value stamp in the series, the $10 Vanda, “Josephine Black”. The error is described in the catalogue as SG524a ‘Dull Green (stems) omitted’ and is best viewed against the normal stamp for comparison.

You can quite clearly see the difference, with the omitted green turning the stems and leaves yellow and the background blue appearing slightly lighter. In the 2007 catalogue this is only priced mint at £130 so if anyone has a used version this may be worth considerably more.

The early Britannia’s were generally fault free apart from some which were there from the very first printing however one or two plates have characteristics which set individual stamps apart as varieties.

One of these was SG19 which has a flaw known as the ‘patch on sail’ variety and through careful plating it has been established that this occurred at row 11, stamp 4 (R11/4).

One thought on “Barbados Stamp Flaws”