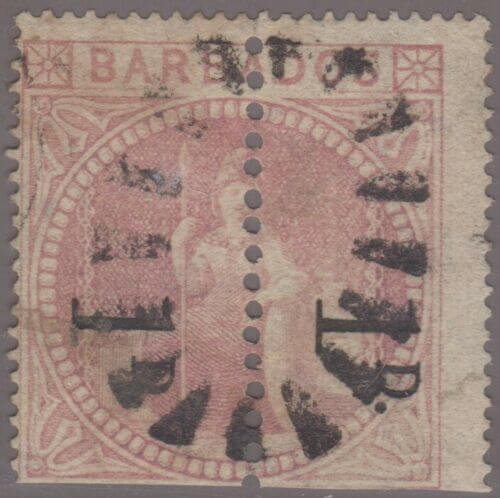 Stamp forgeries have been around almost as long as stamps themselves and since 1840, collectors have been hard pressed to separate genuine from fake.

Some forgeries are easier than others to spot and if you look at the forgeries section of this website you can see the crude attempts of some early forgers.

But some of the hardest forgeries to spot are those which take a real stamp and alter it in subtle ways, to make it more valuable.

Examples of this include adding a postmark to a previously mint stamps, which was the stock in trade of the famous forger Jean Sperati, reperforating stamps which have lost theirs along the way and cleaning used stamps to make them appear mint.

As I write this there is a stamp for sale on eBay, purportedly a ‘rare’ Barbados stamp, but in reality, I believe, a dangerous forgery.

The stamp in question is, if real, one of the rarities of Barbados philately and is from the 1878 provisional issue where the 5/- stamp from 1873, which had seen little usage since its issue, was overprinted and bisected to make two 1d stamps. This was to provide sufficient stocks until a new printing of the more often used 1d stamp were sent out from England.

The 5/- stamps were taken in sheets and overprinted locally by Mr Frazer from West Indian Press, a Barbadian printer, who then bisected the stamps with a locally available perforating machine.

Few of these stamps exist intact as a mint ‘pair’ and very few were used as a pair to pay the tuppence rate as there was a perfectly serviceable 2d stamp still on sale and available for use.

There were however some used examples, all of which have been documented, and examples illustrated, by Roett in his book Barbados: The Britannia Issues, after the earlier work by Jaffe and Kellow.

Which brings us to the stamp in question; 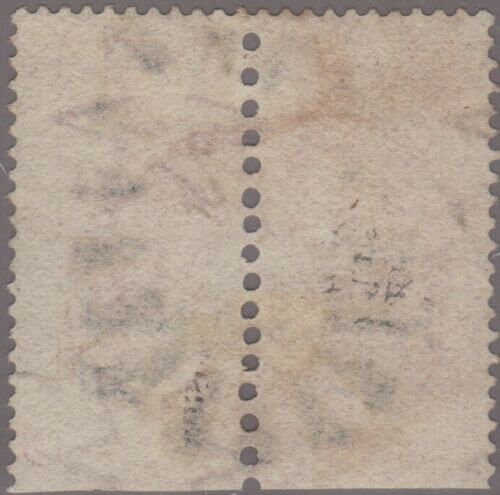 At first glance it appears to be a very nice item but the moment I saw it I had concerns. The stamp is ‘supposed’ to be SG86b, with the curved serif 1d reading upwards, but I’ve now looked at it for two days and I can see three areas which cause me to believe this is a forgery.

The most obvious issue appears to be the perforations down the middle of the stamps, used to bisect it.

As one well known Australian dealer often says, “that looks to have been done by a Blind Nun with a hat pin”.

Perforating machines contain a series of pins in a straight line which, when applied to the stamps, will produce a clean, regular set of holes. This has neither straight nor regular holes.

If you look closely you will see that the holes vary in size, which is not possible with a properly perforated stamp and they are not straight either. A perforating machine can only make the holes in a straight line.

The perforations are also very large, much bigger than those applied at the side of the stamp, which is inconsistent with the perforations known to have been applied to this issue.

So these perforations appear to have been added manually at some time after the stamp was used.

Fortunately, Stanley Gibbons currently have a Mint copy for sale on their website which looks like this; 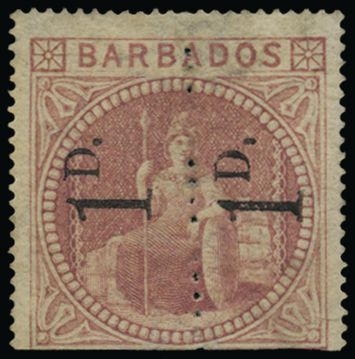 The local perforating machine was no better than a pin perforator, applying small regular holes to the stamp. You can see what the real perforations look like and a simple comparison shows that our suspect stamp is a fake.

And once you’ve seen one thing that looks wrong, the tendency is to look for other clues to support your original diagnosis.

The original overprint was done locally and all the examples I have ever seen have regular, consistent printing on both sides of the stamp. At no point have I seen a copy where part of the numeral is smudged or indistinct.

The right hand side of this stamp however has a nice clean overprint but the left hand side looks wrong. On its own, this might not be an issue but alongside the perforation, it simply doesn’t look right.

The overprint is also quite low down on the stamp, where most of the copies I have ever seen are much higher up and better centred.

This one, appears to have a slight slope on the bottom right hand corner of the stamp, which if you’ve ever tried cutting paper you’ll know, is a characteristic of using scissors.

It’s a minor point and could easily be explained away, but not with the presence of those perforations.

After a while as a collector, you get to spot a stamp forgery quite easily. Ask experienced dealers how they do it and they will tell you that they can “smell a wrong ‘un’”.

Of course, they cannot actually smell anything it’s just that the way the stamp presents itself visually that tells them something feels wrong.

And that’s the case with this one.

To most observers, this seems like a nice stamp but as it’s one of the rarest in Barbados philately any buyer would need to be absolutely certain of its genuineness. If you did want to buy this stamp you should make sure that it comes with a certificate of authenticity from a well known issuing body.

The description on the Stanley Gibbons website gives you a clue to why someone would want to forge this stamp, they say;

1878 (28 Mar) 1d on half 5s dull rose, bisect provisional, horizontal unsevered pair, both with type 3a surcharge (reading upwards), part o.g. (a little disturbed with gum loss at top). Right half with small tear at SE corner and trace of thinning, but the left half fine, and overall fine appearance. A major BWI rarity, with only two other such unused pairs believed to exist. Ex Hurlock (H.R. Harmer 18 Jun 1958, lot 551). BPA cert (2017). (cat £26000)

With a catalogue value of £26,000 for the mint stamp and anywhere between £4,000 and £15,000 for the used, the attraction seems clear to a forger. But the sheer rarity of this stamp means that it is always bound to come under scrutiny by experts.

And if you are going to forge something that will fool the experts, you’d better do it well, not like this amateur attempt.

3 thoughts on “Is this rare Barbados stamp a dangerous forgery?”