Barbados Stamps | Britannia’s – how to identify them

Far and away one of the most daunting things when I first started collecting Barbados stamps, was attempting to separate the Britannia’s and correctly identify which was which. After all there are a lot of green Britannia’s in the catalogue and they all seem fairly similar. So, where to start?

The stamp on the left is a good example of this type – it appears to be a green stamp with Barbados on it – like so many others. It is in fact SG8, described in the catalogue as ‘green (shades)’ and issued in 1858.

The second test is whether the stamp has perforations or is imperforate. This one is clearly imperforate and would originally have been on a single sheet and separated with a pair of scissors. Whilst this is again a good way of establishing which stamp you have it is not foolproof. I have seen some of the early pin perf’s which appear to be imperforate and there are of course examples where stamps have had their perforations clipped off.
Imperforate stamps were issued between 1852 and 1858, and examples exist with both the Barbados name across the bottom, or the rate across the bottom. In fact there are only four stamps which are both imperforate and have the rate across the bottom and they are SG 11, 11a, 12 and 12a, all issued in November 1858. I’ve included an example of SG11 here so you can see what you should be looking for. 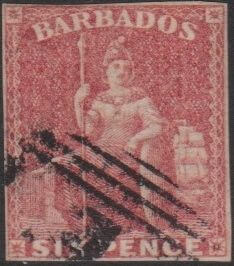 So, if the stamp is imperforate, it must be SG 1 to SG 12a as after this all stamps had perforations of one sort or another.

Colour plays a large part in sorting out which stamp you have and this can be very difficult indeed as with age, many stamps lose their colour or they get exposed to sunlight and fade to a different shade. This can be critical, especially with the early stamps as the difference between red and carmine for example can mean a premium of over £100 on the stamp. Generally speaking though if you have a green stamp it is 1/2d value and a blue stamp 1d value. Beyond that there are red rose stamps for example at both the 4d and 6d values so colour is only one of your guides.

The next area of difficulty, but essential for establishing which stamp you have, is watermarks and finding these, particularly on older stamps which have been hinged, can be very difficult. I will be putting a separate page on showing the more obvious watermarks sometime soon.

So if you’ve nailed down whether the stamp is imperforate or perforated, then the colour (and rate) and can see the watermark on the back, you are there in terms of the basics. Separating some of the earlier pin perfs and rough perfs can be a bit tricky but with practice, and having bought some of these stamps from dealers, auction houses and traders at Stamp Fairs, you will quickly get an understanding of what you are looking for. 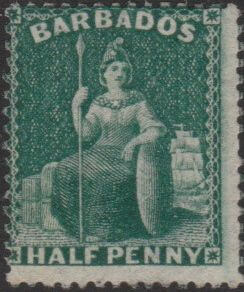 Another good indicator is the ‘clarity’ of the stamp. Does it seem a bit blurred or is it a nice clear printing? The early stamps, up to 1874 were printed by Perkins Bacon & Co and they seem a little, almost out of focus you could say, when viewed at first glance. By contrast the DeLa Rue printings from 1875 onwards are a lot crisper and cleaner – see the example on the left here and judge for yourself against the stamps above.

One thought on “Identifying Barbados Britannia’s”