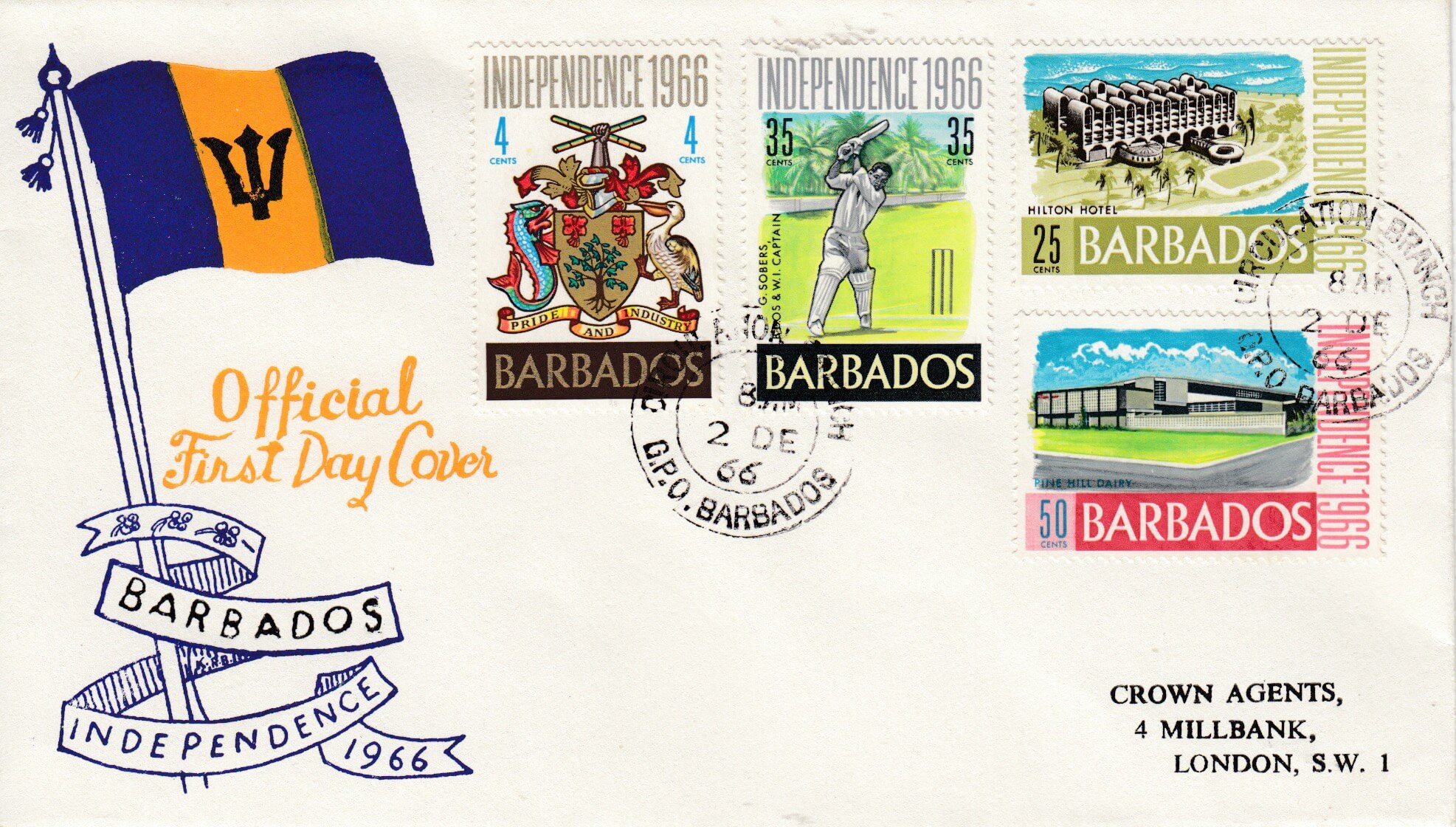 Today, 30th November 2020 marks 54 years of Barbadian Independence and is a National Holiday in Barbados. It’s come a long way since the first year of Independence in 1966/67, where philatelically, it was celebrated with a special stamp issue.

In that time there have been no fewer than eight separate Barbados stamp issues marking various stages of independence and to date, I’ve never listed them all so time to put that right.

The first set of stamps was issued on 2nd December 1966 and was set of four, the 4c featuring the Barbadian Crest, the 25c The Hilton Hotel, the 35c Sir Garfield Sobers, and the 50c Pine Hill Dairy.

This set was followed up a year later with another set marking the First Anniversary of Independence and this was again a set of four stamps.

The 4c stamp featured a profile of the Governor General of Barbados, the 25c The Independence Arch in Bridgetown, the 35c The Treasury Building and the top value, the 50c showed the Parliament Building.

There was then a break of four years until 1971 when another set was issued to mark five years of Independence.

This set, again a four stamp set, was simpler than the previous issues in that it used just two designs; the Flag and the Crest, repeated twice each. The Crest was shown on the 4c and 25c stamps, and the Flag on the 15c and 50c stamps.

It’s worth noting a this point that the values on the stamps hadn’t changed in the first five years, showing that postage rates had remained constant during this period.

There was then a break of five years before a 10th Anniversary set was issued, and this time, as well as the standard four stamps in the set, there was also a mini sheet containing all the four stamps and a decorative palm tree surround.

Once again the values remained the same but they showed different images. The 5c highlighted the work of the Coast Guard, the 15c was the design from the reverse of one of the banknotes, the 25c was sheet music with the Barbados National Anthem on it, surrounded by musical instruments and the top value $1 was of the Independence Day Parade.

As you can see from the new values, inland postage rates had gone up from 4c to 5c!

There was then a break of 11 years, during which a lot of stamps were issued but none celebrating the Independence anniversary. This was remedied in November 1987 with a set commemorating the 21st Anniversary of Independence and once again, it was a four stamp set with a mini sheet to accompany it.

The designs this time were much simpler, using icons of Barbados with the lowest value, 25c stamp, showing the Crest plus a coin with the Seal of the Colony chariot motif on it. The 45c showed both the Barbados and British flags, linking the independence with the past and likewise the 65c showed both Barbadian and British coins. The top value $2 stamp showed a group of flags, including both the Union Flag and the Barbados Flag, but the mini sheet honoured the ‘Father of Independence’ Errol W Barrow, who had died that year.

Recognition of the Independence was on the cards fairly quickly after that with another set in 1991 to mark the 25th Anniversary.

This set was a departure from previous sets with five stamps and no mini sheet, and compared to previous offerings, it was relatively bland. The design was based around a ribbon which scrolled around the stamp and an inset picture of Dame Nita Barrow in the top right hand corner of each stamp. The min difference, apart from the value table, was the vignette which changed for each value.

The 10c showed Education, the 25c the Workers Union, 65c Industry, 75c Agriculture and the top value $1 was Health.

Ten years on and a set was issued to mark the 35th Anniversary of Independence and it was quite an odd set, with four stamps, two featuring photographs of Crop Over on the 25c and a Tuk Tuk band on the 45c, then a Maypole on the $1. The top value however, the $2 featured musical instruments and words to the National Anthem.

The set doesn’t quite sit together as well as some fo the earlier sets and some of the designs, like the 25c, leave a lot to be desired.

Then, from the 35th Anniversary there is a wait until the big one, the 50th Anniversary in 2016, when another set was issued, this time with six stamps and some eye catching designs.

First of all, each of the stamps in the set used the same blue theme, with each of the main industries that make up the Country illustrated. Starting with the 10c we see Transport, featuring one of the signature blue Corporation buses. The 65c highlights Education and shows Samuel Jackman Prescod Polytechnic.

The $1 echoes one of the themes from the very first set of Independence stamps and shows Pine Hill Dairy again, this time to highlight manufacturing. The $1.50 stamp entitled ‘Sports’ shows ‘the’ Bajan sport and that is cricket, followed by the $1.80 stamp showing indigenous Black Bellied Sheep for Agriculture. Finally the top value $2.20 stamp shows another icon which featured on the first set, the Hilton Hotel representing Tourism.

Which brings us up to date, as today is the 54th Anniversary and of course, there is no stamp set to commemorate this event as it’s not a memorable number although it is a memorable day.

So we wish everyone a very happy Independence Day and we hope you enjoy the holiday!