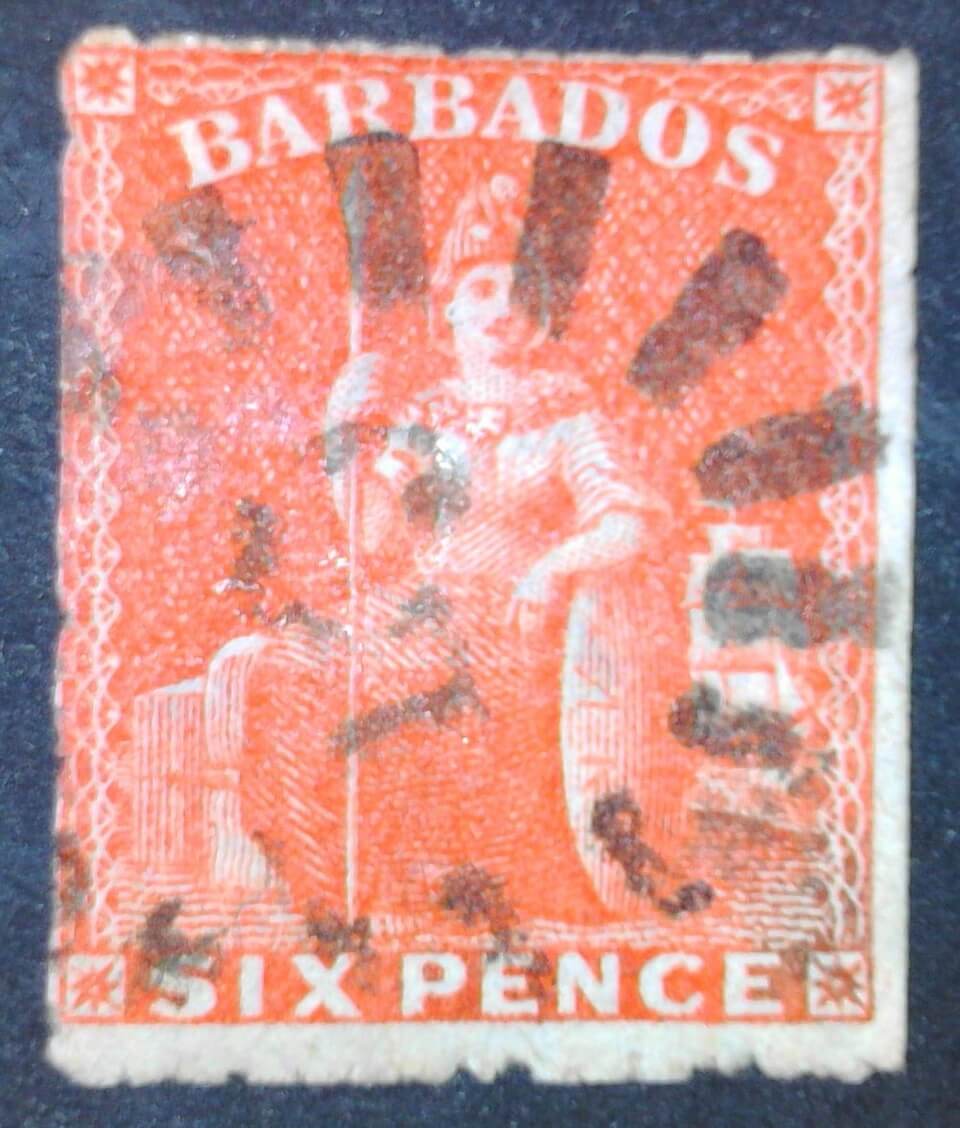 I’m indebted to fellow Barbados collector and member of BWISC, Richard Stupples, for sending me the following article. Whilst researching one of the stamps in his possession, he believes he has stumbled upon an anomaly with the perforations on a stamp in his possession, possibly a pin perfs variety instead of rough perfs, and never before recorded, and he wonders if anyone can help him solve the mystery?

The nice postmark caught my eye when buying this and I accepted the common flaw thinking that it would be nice if it was genuinely imperf on the right-hand side however the position of the perforation line down the left-hand side, cutting into the design margin indicates that this is most likely separated by scissors because of perf position rather than it being imperf.

I finally got around to actually looking at the stamp to consider putting in the display, some of you may have picked up on the perforations which appear to be pin perf, which as far as I can tell to date, this perforation appears to be completely unrecorded.

As the magnified images show the reason why I think this is cut down rather than it being a genuine imperf as it is fractionally smaller than the comparative copy overlying the one under scrutiny across the width but the length is comparative to other stamps of the issue.

What I have on all other copies of the small star watermark issue from Barbados is similar to the normal perf image, the size of the holes does vary and so does the spacing and on several copies, it has clearly stopped mid stamp and then started with a different gauge

To be clear, I define a rough perf stamp as a stamp which has been perforated producing a series of holes that are both uneven in size and alignment:- the holes are reasonably produced but have different sizes of pins and they are not in an even line. There is also a tendency for the pins to be “blunt” so the paper does not cut evenly around the hole, leaving fibres and jagged edges to the perforations.

Can I please ask other collectors if they have any other copies similar?

What’s special about Barbados SG50 and why can’t it have pin perfs?

Naturally, Richard’s article sent me scrambling into my collection to see if I could find anything similar in my copies of SG50 and lo and behold, I have found a couple that might help.

We should start, of course, with a bit of background to this stamp as those of you unfamiliar with it might be wondering what the fuss is about.

The stamp in question, SG50 is a 6d orange-vermillion stamp and was issued in 1871, being sent to the island in a consignment from Perkins Bacon, the printers, on 12th July 1871. The stamp was printed on ‘small star’ watermarked paper, which had not been used before on Barbados stamps. It appears that the printers had exhausted their supply of the previously used ‘large star’ paper so chose to use ‘small star’ watermarked paper in this instance. There were just 44,000 of these stamps printed, it being a popular denomination for sending mail overseas, and contemporary records suggest that the stamp was placed on sale fairly shortly after arrival on the island, which would have been sometime in August 1871.

The stamps were all perforated using the existing machinery and were, as per the trend at the time, rough perforations of between 14-16. This was the last consignment of stamps sent to Barbados with this perforation type as following this issue, in 1872 the next delivery of stamps were all perforated on new machinery, resulting in clean-cut perforations. At the time, the perforators were not fabulous and complaints were made regarding the lack of perforation on sheets that had been perforated. Within the Post Offices, clerks trying their best to separate stamps, both the earlier pin-perf and now these rough perf stamps, had long since taken to using scissors as a more reliable method of separation, as with the perforations being so poor, the stamps were prone to tearing when they were separated for use. This explains why you can often find straight edges on some of the issues around this time; it’s not previous collectors with a zeal for neat edges, just the Post Office clerks trying to do their jobs as well as possible. I’ve previously written about the perforations in this article which covers the subject in a little more detail.

This brings us to the stamps in question. All of them are recorded as having been perforated using the rough perforation method which is the purpose of Richard’s query, and with the next batch of clean-cut perforations arriving on the island a year later, they were only on sale for about twelve months.

Here’s a mint copy from my collection, showing the front and back of the stamp, with the small star watermark clearly visible;

You will see that all around the stamp the edges are ragged, a characteristic of the rough perforations found on this issue.

What I found next was that one of the other copies I have, a slightly grubby one, does have some perforations approximating to those found on Richard’s stamp, but it’s still clearly a rough perforation;

You will notice that the right hand edge has clearly been the victim of scissors at some point, leaving what could be interpreted as pin perforations on that side. The top however has nearly all the perforations removed, but somewhere near the middle, you can see the remains of where the perforations were.

What does a real pin perf stamp look like?

To illustrate the difference, I’m going to show you what a typical pin perforated stamp looks like. This stamp is SG13 from 1860 and you can see from the images that the perforations appear to be nothing more than a series of pin pricks down the stamp. This is because in the early days of perforations (this being one of the first stamps in Barbados to be perforated), they were nothing more than that; a series of sharp needles in a row making holes which might be used as perforations to help separate stamps.

So, pin perforated stamps had small needle-like holes inserted between the stamps; rough perforations were bigger, more disc-like holes that were punched out of the stamp.

Back to the original question, therefore, is Richard’s stamp a pin perforated or a rough perforated stamp? Any collectors out there who have examples of this stamp and would like to offer a view, add some images or offer some evidence for or against, please feel free to get in touch!