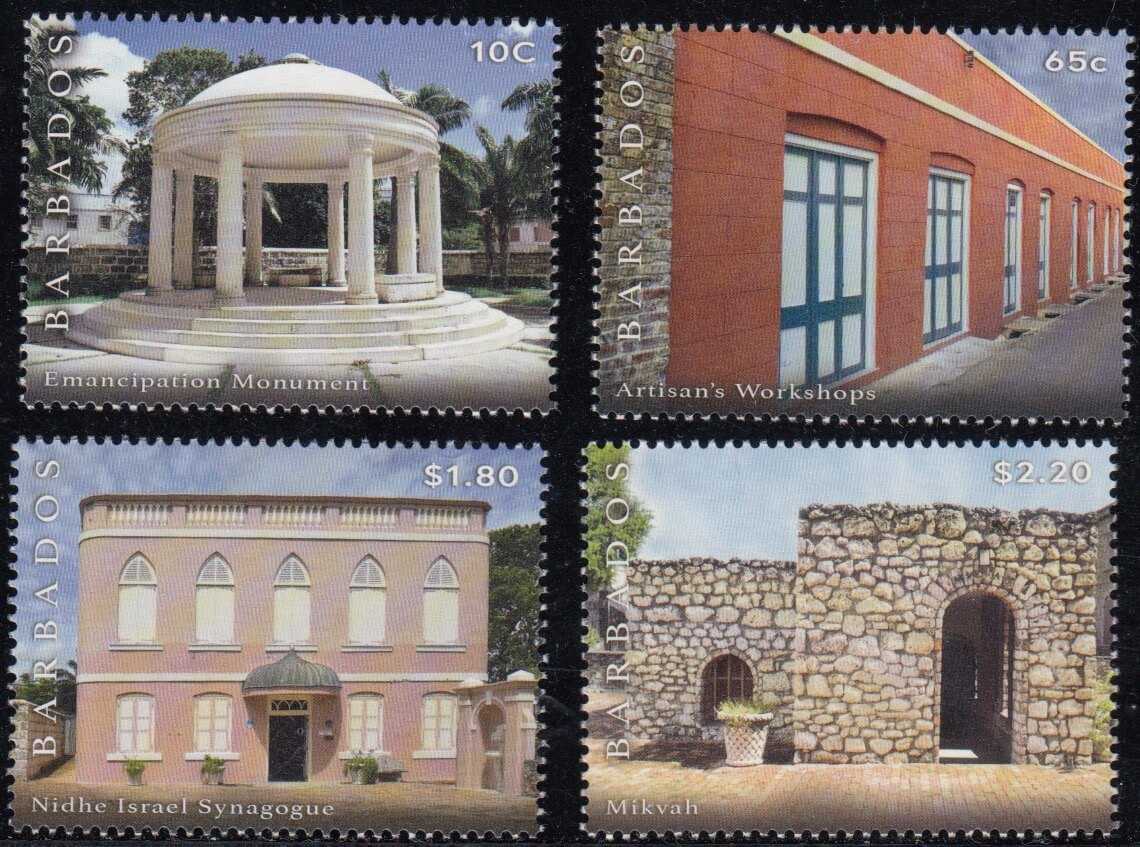 The Barbados Stamps Synagogue Block Restoration stamps have finally arrived with me and as promised in the earlier post, here are some better images, plus a first look at the First Day Cover that accompanies the series.

There are four stamps featuring four different elements of the restoration project. The entire project to restore the synagogue block has been underway since 1986 and only finished in 2017 after just over 30 years of hard work. The Barbados Synagogue Restoration Project was aimed at restoring an entire district, rather than just a single building or monument, and the stamps reflect four of the buildings that have benefited from this work. During the work in 2011, the Synagogue was designated as a UNESCO protected property within the World Heritage Site of Historic Bridgetown and its Garrison.

The smallest denomination in the set is the 10c stamp which shows the Emancipation Monument. This has been erected where Codd’s House once stood, on the site of what was a very early Barbados parliament (1837-49)

The next value is the 65c Artisan’s Workshops, often referred to as the ‘Old Shoemaker’s Shops’. The building was constructed in 1869 on land which has been used as Jewish burial grounds for anyone denied full ritual burials. The restoration has been able to include new workshops in the building, including a shoemakers shop.

The £1.80 value shows the outside of the Nidhe Isreal Synagogue, one of the oldest synagogues in the Western Hemisphere. Originally built in around 1654, the building was damaged in the hurricane of 1831 and rebuilt on the same site in 1833. In the early 20th Century the building fell into disrepair and was abandoned until 1983 when the Government acquired it. Renovation work started on it in 1986 and it was recreated using photos from the Barbados Museum and Historical Society. Today the synagogue is open for worship.

Finally, the top value in the set is the Mikvah, or ritual bath for purifying the body. Originally developed for the Jews that built the synagogue, it is located nearby and also dates back to around 1654. It was only unearthed in an archaeological dig in 2008, when they discovered an original marble staircase leading down to a pool of water. The bath has a granite tile floor and coral stone walls with small alcoves on the walls where lamps would have been used to light the batchs. The bath is fed by an active underground spring.

Accompanying the set of four stamps is a First Day Cover showing part of the interior of the Nidhe Isreal museum, featuring an interactive display documenting Jewish life on the island from a historical perspective. It shows many of the historical artefacts uncovered during the archaeological dig in 2008.

Overall this is a really nice looking set and one which does exactly what stamps should do; to tell the story of the place from which they came. These tell the story of an early, enterprising Jewish settlement on Barbados from the mid 1600’s, advanced enough to construct these wonderful buildings and even marble staircases, which must have been imported. Definitely a lovely set and worth owning – you can buy a set from the shop here.