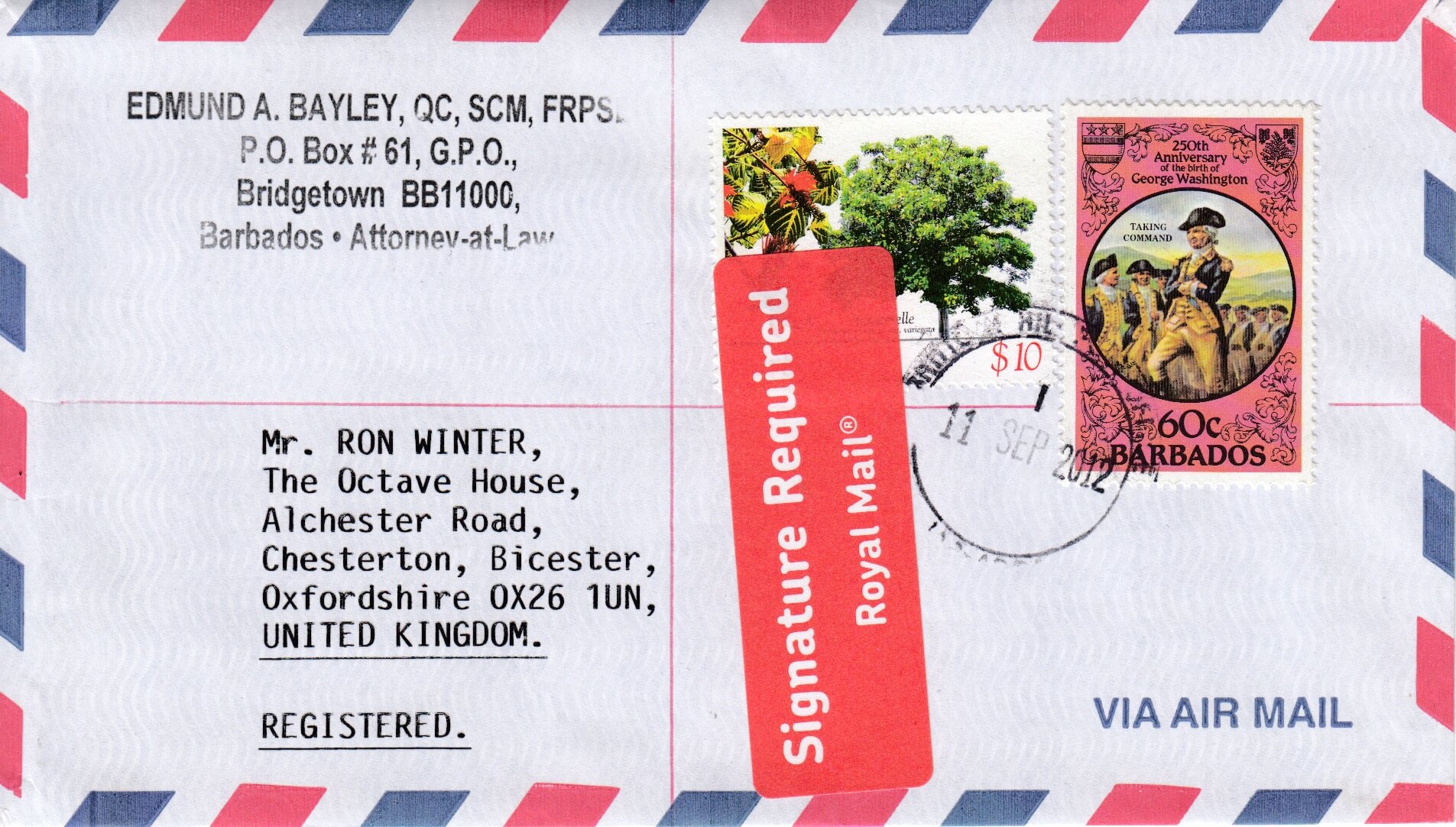 Often you hear that modern covers are not as interesting as the old ones and as such people shun them. I take quite the opposite view.

Some of the covers which are now regarded as important and a wonderful example of the postage of the era were, in the past, regarded as commonplace. Take for example a cover with the humble Penny black on it. Once upon a time they were literally two a penny but today, if you want to buy a cover with a penny black on it then you can start at £50 and keep going upwards into the tens of thousands. So what is it that turns the ordinary into the extraordinary? Why are some covers valued in pennies and some in thousands of pounds?

Well, typically it comes down to the quality of the cover, the stamp, the cancel, the destination and on some cases a combination of all of these. And sometimes it’s the sender or the recipient which makes it interesting.

Which brings me neatly onto this cover. I think it’s destined to become a modern classic. 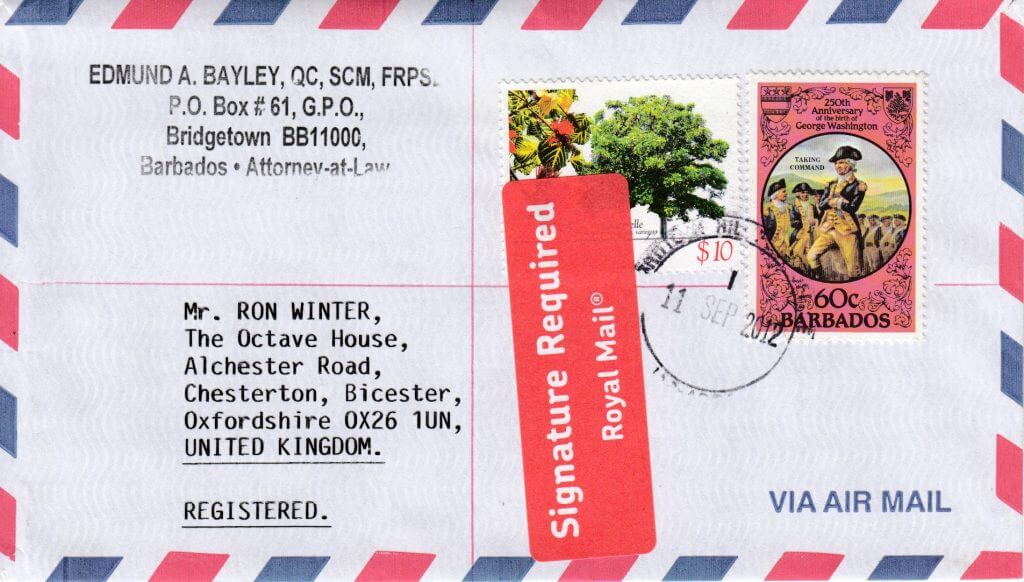 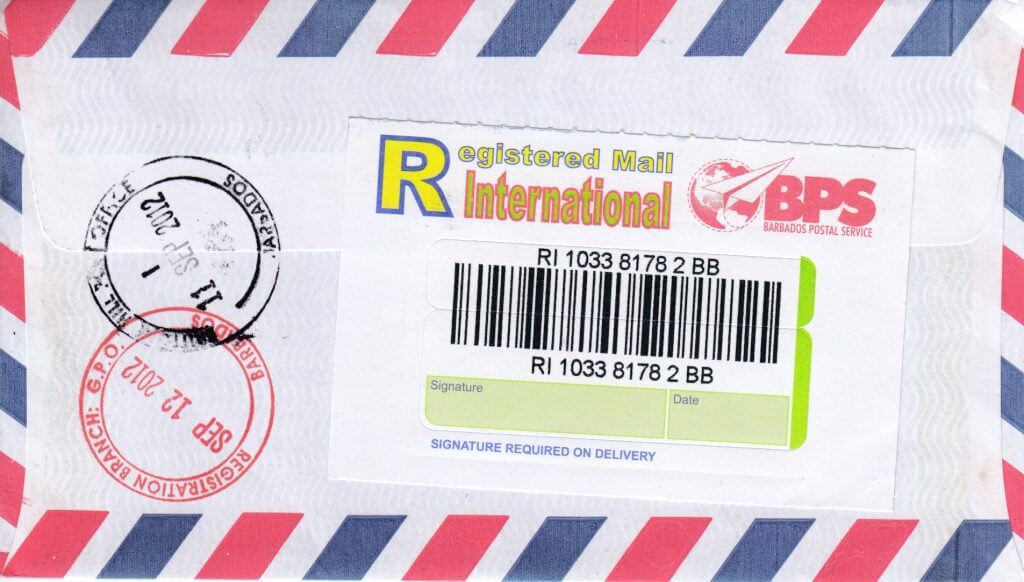 What makes this stand out?

Firstly, let’s dispel the idea that this is philatelic in any way. Yes it has been sent by Edmund Bayley, author of ‘The Stamps of Barbados’ which is the definitive work on the stamps of the island but it’s not a philatelic cover. A philatelic cover is an envelope prepared with a stamp(s) and address and sent through the mail delivery system for the purpose of creating a collectible item.

This item however has been sent thorough the mail as normal, except that this is a registered letter on a standard airmail envelope. Bear in mind that by 2012 if you wanted to send a Registered Envelope from Barbados you were issued at the counter with a standard plastic envelope which we have featured before. This defies that logic.

Secondly, it has a genuine postal usage of the $10 Flowering Trees definitive from 2005, “The Immortalle” (SG 1280) coupled with a 60c taken from the George Washington set of 1982 (SG716) Washington with Troops. If you were creating a philatelic item you’d be unlikely to mix up stamps issued over 20 years apart.

Thirdly it has nice clear cancels on the back showing the date of sending and registration, 11th and 12th September 2012, along with the Registered Post tracking label.

Finally, as if to prove that this is genuine, it has a Royal Mail sticker on the front proclaiming ‘Signature Required’ which was of course needed to fulfil the requirements of the Registered Mailing.

Now it may be that Mr Bayley sent a rare stamp to Mr Winter, or it could equally be that it was a legal document which required tracking. We will probably never know but wither way what we are left with, thanks to the diligence of whoever opened it, is a cover which shows a number of aspects of the Barbados and UK postal systems in 2012.

It’s not old but I would argue that it is interesting. There are many more covers out there like this and in 100 years they will be immensely valuable. Except today’s generation throw them in the recycling without a second thought.

Where will the classics of tomorrow come from if it’s not the postage of today?