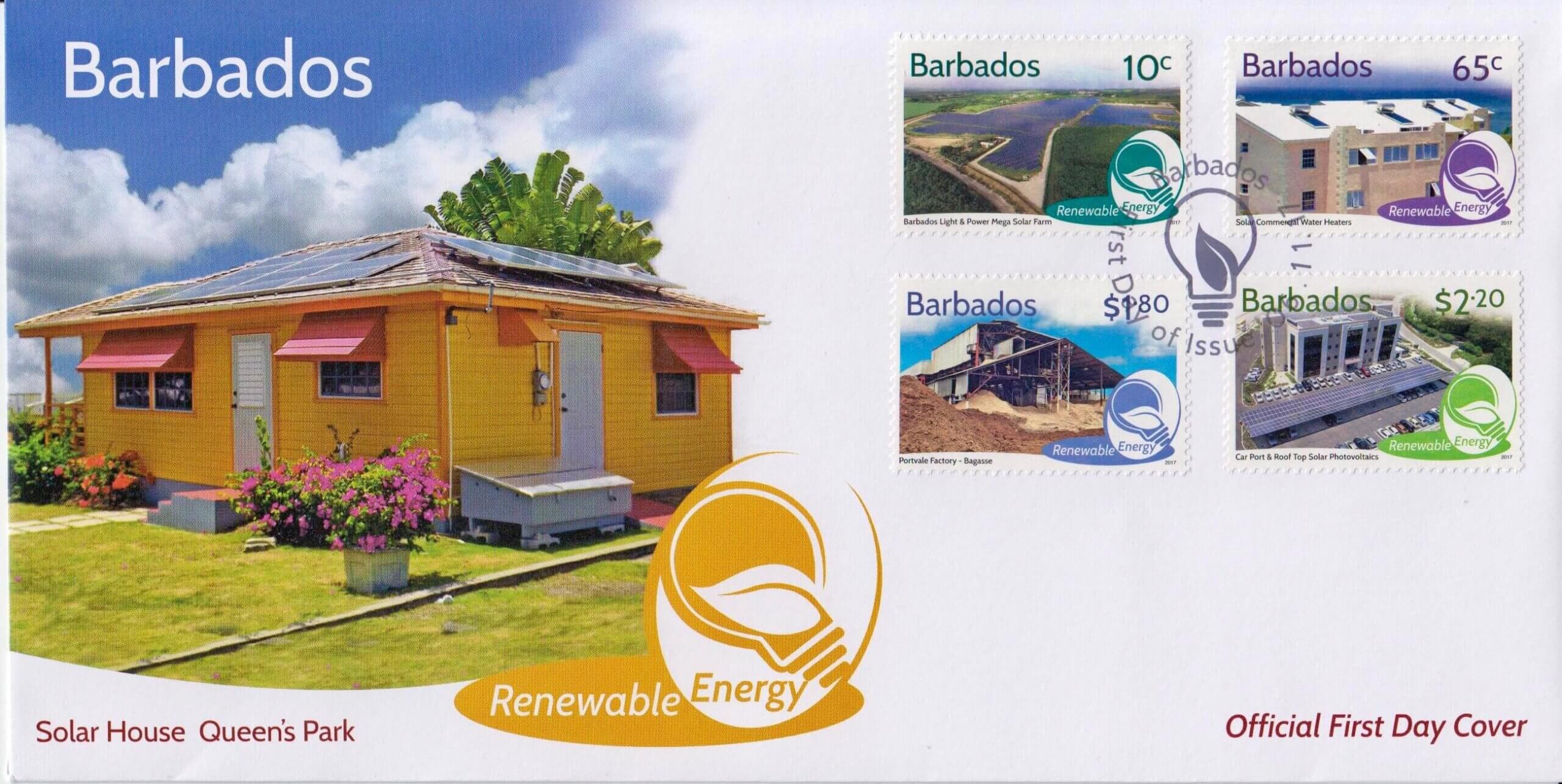 Barbados Post Office issued a new set of stamps on 6th November 2017, which celebrate the role of renewable energy on the island.

Designed by Andrew Robinson and printed by Lowe Martin in litho, this new set of just fours stamps are a very nice design and as is traditional with Barbados stamps, they feature the island itself.

The four stamps are as follows; 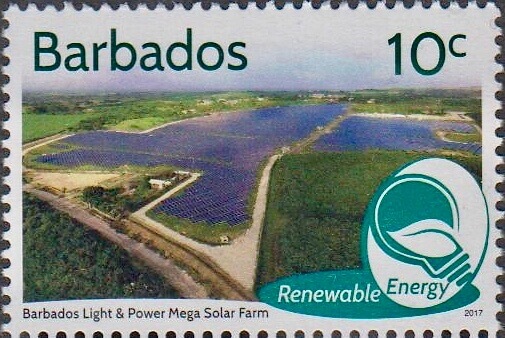 By a strange coincidence, earlier this year I drove past the gates to this installation in St Lucy and got just a glimpse of the plant behind the gates. What I hadn’t realized though is that from the air, as you can see from the photograph on the stamp, there is a massive array of solar panels.

The 10Mw solar farm installation is owned and managed by Barbados Light & Power and it is set to deliver 20Gwh of electricity a year, thus reducing the island’s dependence on costly imported fuel.

Given the abundance of sunshine on Barbados this really is a step towards self sufficiency. 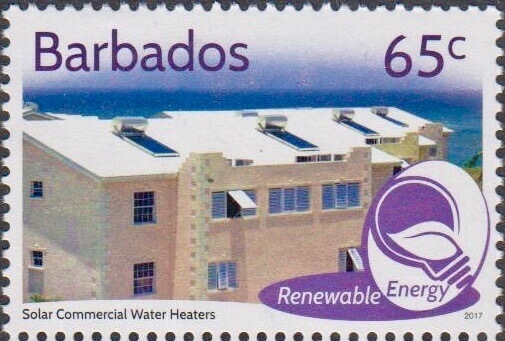 Barbados has been using solar water heating since the 1970’s and in common with many other countries, including a number of Mediterranean destinations where sunshine is guaranteed; these provide a cheap way of providing hot water.

They were first introduced in response to the energy crisis in the 1970’s but soon established themselves as a good way to reduce dependence on other heating mechanisms and now up to 30% of all commercial properties on Barbados use this technology. 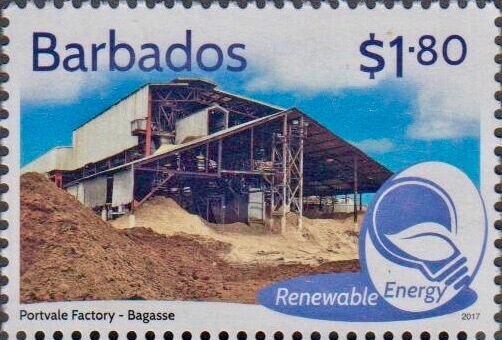 Bagasse, which is also known as megasse, is a by product of the sugar production process. It is the fibres left behind once the sugar bearing juice has been extracted from the sugar cane.

Typically, this residue is burned in the furnaces at the factory as it can be used to produce steam, which in turn can drive the turbines and generators that power the plant.

This qualifies as a ‘green’ process by virtue of the fact that whilst it is growing, the sugar cane feeds on CO2 thus removing it from the environment. The bagasse can be used as an ‘on site’ fuel source for the factories thereby reducing the need to import and transport fuel. 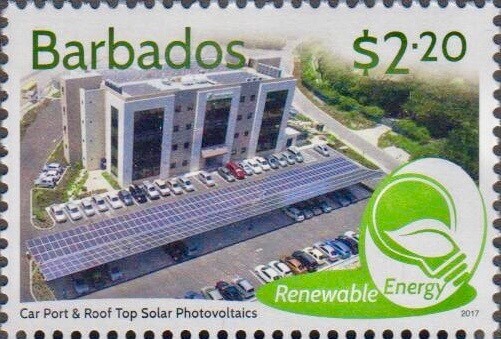 This stamp shows the new car port at One Welches, which has been designed to cover 56 car parking spaces and simultaneously charge up to eight vehicles from renewable energy.

This development is significant as Barbados is totally dependent on imported fuel to survive as a nation and if you visit the island you can see the fuel ships arriving from Carlisle Bay.

One Welches was designed and built to be Barbados most energy efficient building and by definition therefore the most environmentally friendly. It was built using Leadership in Energy and Environmental Design principles (LEED) with a focus on natural lighting, human health and wellbeing. As well as the solar panels it also features rainwater harvesting, advanced Heating and Air conditioning technologies and solar PV on the roof 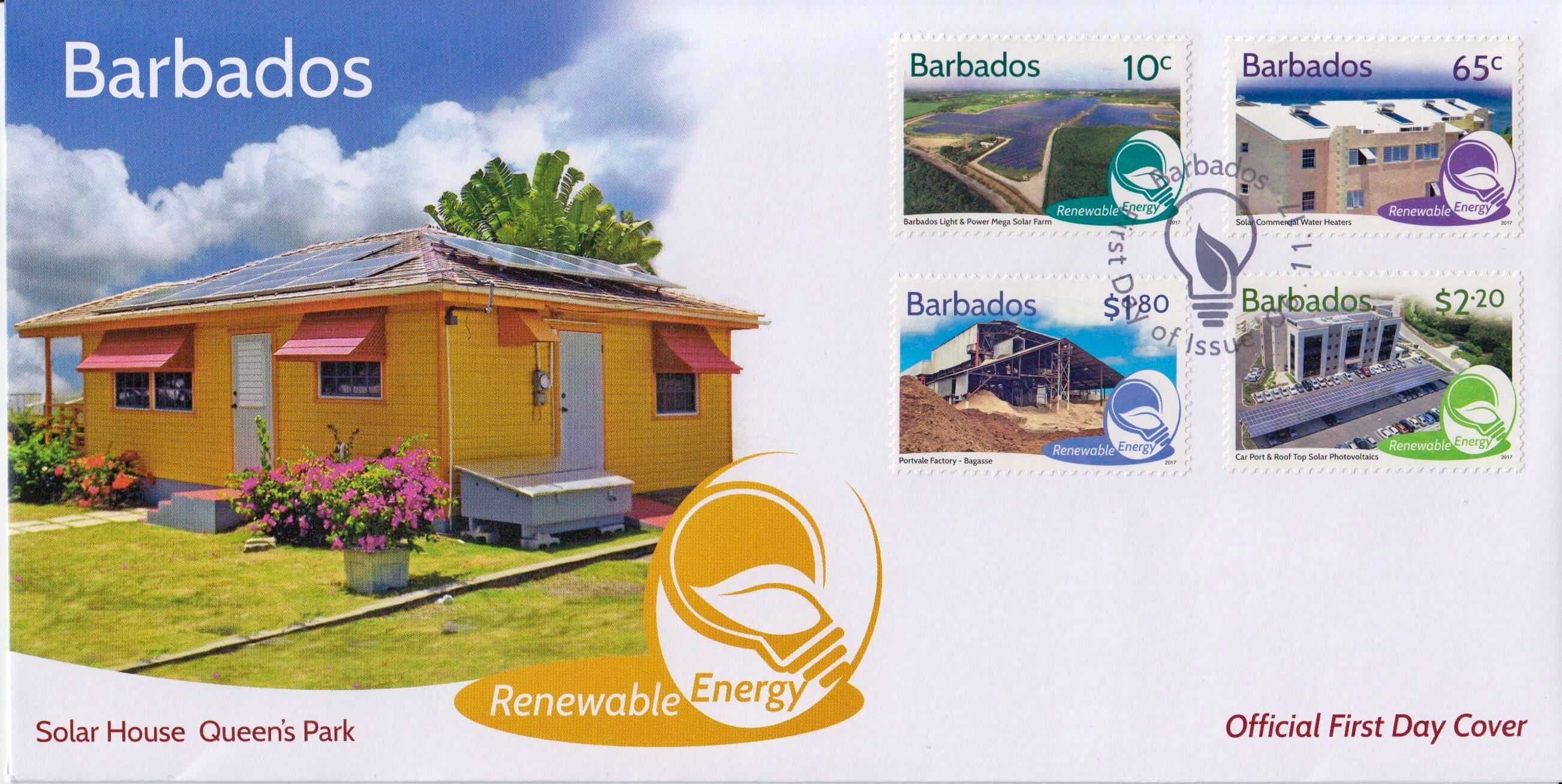 The design on the FDC shows a prototype house, built at Queens Park in 2007 and designed to be totally self sustainable.

Completely independent of the electric grid, this house has a 2Kw solar system which is enough for the average Barbadian home and is powered by an array of solar panels on the roof.

Along with a range of other energy saving measures, this home was designed to demonstrate the feasibility of renewable energy on Barbados and by using Solar power, which is not is short supply on the island, it has sown a path for future development which could see the island become self sufficient in the future.

The stamps are well produced and in common with may previous issues, the theme is definitely about Barbados, which is essential. Too often countries divert into ‘wallpaper’ which has no link at all with them. As an example, take a look at the stamps of The Grenadines, just next door.

The subject matter is on point as well being perfectly in tune with modern sentiment. As well as documenting the steps Barbados has made to make itself energy self sufficient it will appeal to any collectors on a ‘green’ theme.

For me, the only disappointment is the image used on the $1.80 stamp. To be perfectly fair, it must be hard to find an image to show the conversion of Bagasse to energy but an external shot of the factory with a pile of bagasse in front of it doesn’t really shout ‘renewable energy’.

Overall though, a very nice issue and defintely one worth keeping.