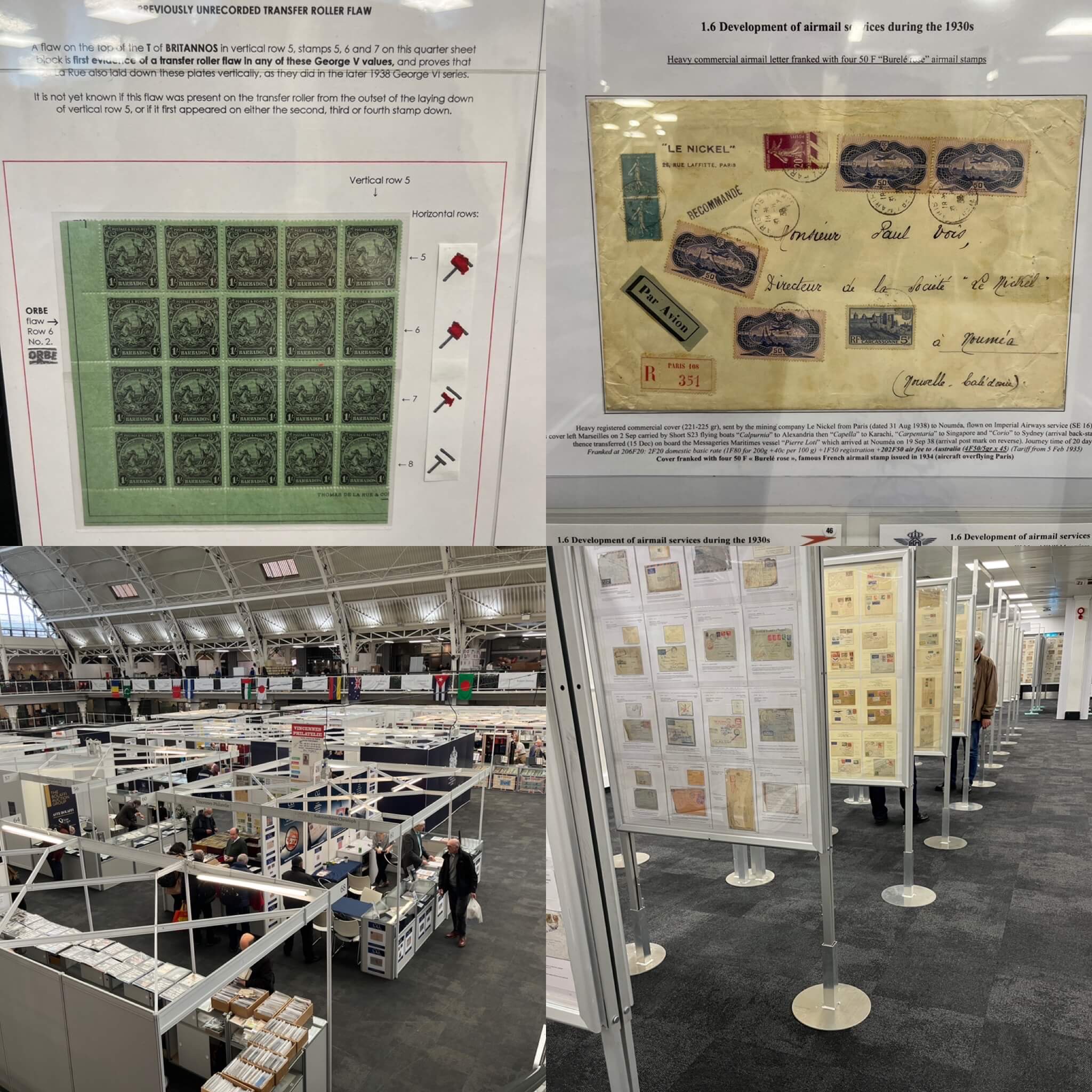 Having attended a number of Stampex exhibitions over the past decade, I thought I knew what to expect, but the London 2022 show exceeded all my expectations.

Delayed from 2020 due to lockdown and the ongoing pandemic, London 2022 still suffered from a number of missing dealers, most of whom were forced to give up their stands at the last minute, not because of any restrictions in London, but because of the problems they would face on return to their countries, with enforced quarantine and other restrictions. Despite their absence, however, the show was still a huge success. And the one thing that was definitely not impacted was the quality of the displays.

Typically, when I attend Stampex at the Business Design Centre in Islington, the format is similar each time. You are greeted on arrival with an array of dealers literature, then into the hall where the first stand you see is normally Mark Bloxham Stamps, usually with Mark sitting front and centre, ready to greet customers old and new. This year was no exception, however, everything else had changed. On the left of the entrance hall was a huge Royal Mail stand, selling a range of GB stamps and on the right, there was Buckingham Covers, behind which was Andrew Lajer, Heinrich Köhler and then for the first time, a Reading Room where you could peruse the literature which had been entered for judging. Further on, up the stairs into the mezzanine and the floor was packed with dealer stalls on two levels and frankly, more material than I could get round in the time I had available.

The real surprise, however, was the exhibition itself. Tucked away to the side of the mezzanine dealers floor, there were three huge rooms, the Gallery Hall, The Gallery Atrium and the Auditorium, all of which were crammed to the gunwales with exhibition frames. No single photograph I took did justice to the amount of material on display but this one give you glimpse into what it looked like.

What was even more amazing was that in total, this was only half of the material on display over the shows’ duration! The displays were swapped out from Tuesday lunchtime to Wednesday morning (though they were still building them at lunchtime on Wednesday).

There were so many stunning displays that no matter what you collected there was something there for you to enjoy. I saw some material from people I know which, whilst not being about Barbados, was equally enjoyable. In fact, I had been fortunate enough to see some of the material over the past couple of years as our local philatelic society regularly invites experts in their field to come and talk to us about their material. Even so, the owners of these had gone above and beyond, adding more and even rarer items to the displays meaning that some of them were literally, as good as it gets. If you look at the scoring awarded by the judges, no fewer than 14 exhibits scored 97 out of a possible 100 points and one of those, I had seen in our local church hall just a couple of years ago! The quality was, quite simply, exceptional, with 225 out of 588 displays scoring 90 points or above, which is enough for either Large Vermeil, Gold or Large Gold awards.

Of the two Barbados displays available, one of them I missed completely as it was in Part 1 of the show and was being removed by the time I arrived at Tuesday lunchtime. Fortunately, I had seen this display before as the owner, Stephan Heitjz had previously shown “Barbados Postal History 1656-1881” at the Royal Philatelic Society London a couple of years ago. Even more useful is the fact that he has now made this display available for everyone to view, simply by visiting this link and then you can scan the QR code in the bottom right hand corner to get a complete copy of the exhibit. And if you like any of the material, a little bird told me at the show that the entire collection will be going up for auction at Grosvenor Auctions sometime in June 2022.

The second Barbados display was by Patricia Capill from New Zealand and I did get to see this one, and what a cracker. It was entitled “Barbados – The George V Line Engraved Definitive Issues” and won a Large Vermeil with a score of 86 out of 100. Starting with the Large Seal issue of 1916 and working chronologically through the subsequent Small Seal issue before finally arriving at the Postage and Revenue series of 1925-35, the display showed not only the stamps, but the proofs, printing processes, and covers with the stamps being used. Of particular note were the ultra rare Stamp Booklets, all of which were present and the covers of the final series showing the individual stamps used commercially, wherever possible. Add to this the examination of watermark flaws and shades of these printings and it makes a huge addition to the available knowledge of these stamps.

In terms of my stay at the show, I arrived Tuesday lunchtime and had to leave on Wednesday lunchtime but still managed to acquire a couple of nice pieces during that time. Oddly, I didn’t buy a single stamp at the show, they were all covers and I will, over time, get some of them up here on the blog. One or two of them make very interesting stories!

On reflection, I can see why these major exhibitions are held once a decade, because the amount of time, effort and planning that goes into making them run smoothly is frankly astonishing. Even with a ten year run up to this, there are still things that don’t go according to plan and the logistics of planning around the earlier Coronavirus restrictions were a job in itself. I also learned that the next time one of these exhibitions is on, I need to plan to spend more time there and definitely try to straddle the two halves of the exhibition. As it was, I missed some displays I would have liked to see as they were being taken down when I was there or being put up and not ready for viewing.

Hats off to the organisers, who did an astonishing job and to all the exhibitors who collectively, provided some of the best philatelic material on the planet for us to see. I’m now looking forward to a more leisurely Stampex in the Autumn and to the next major exhibition in 2030.