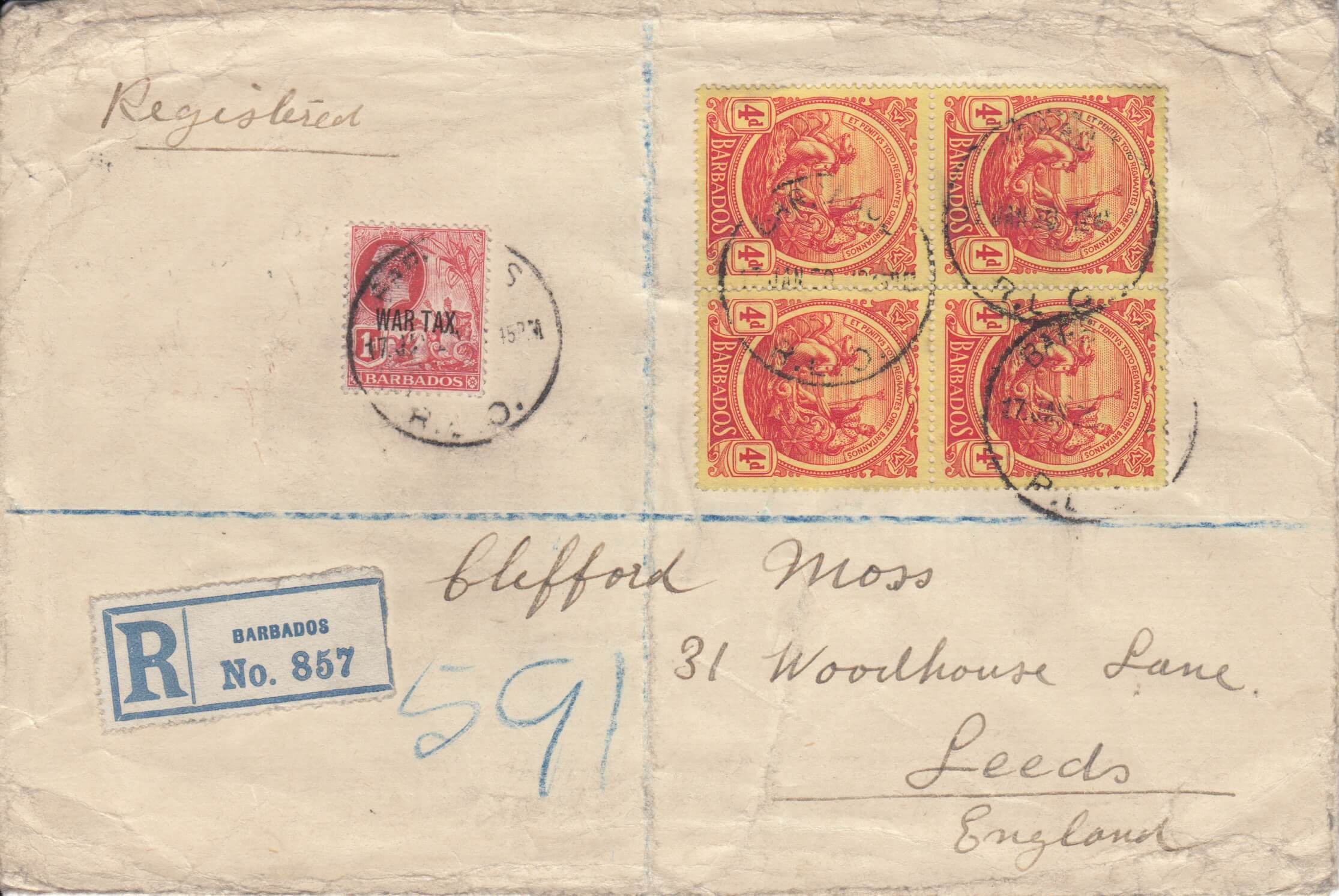 It really is in quite a sorry state. Creased down the middle from a filing fold and with the wax seals on the reverse long since gone, the cover has seen better days. Add to this the battered corners and general grubby appearance and most people would not look twice at this cover if they saw it in a dealer’s box. 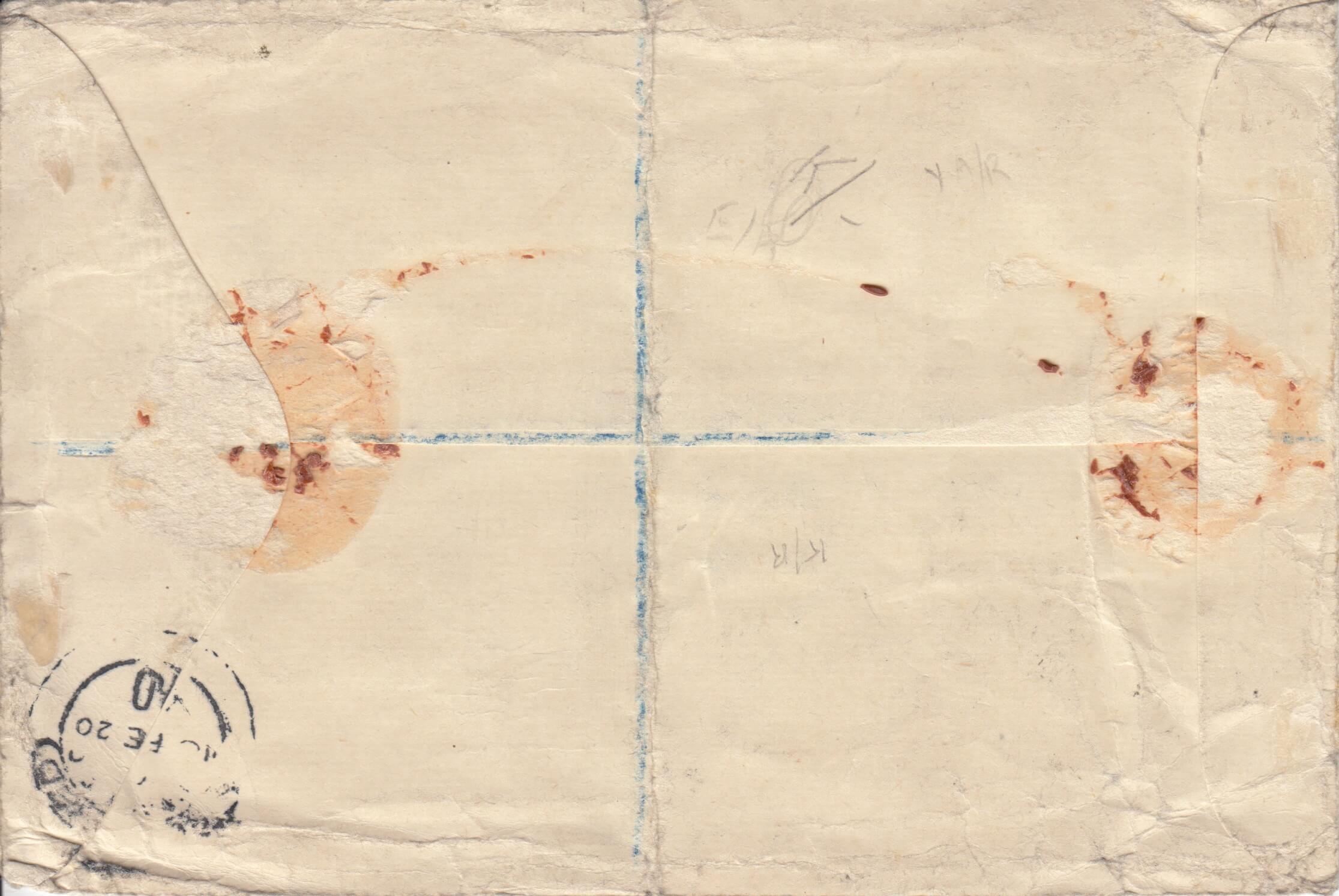 Well, what first attracted me to the cover was the black of four red/yellow 4d stamps as I have a soft spot for any used multiple. In this case, however, the block of four is intact, with no obvious damage to the perforations and the cancellation, whilst indistinct, means the stamps would be considered to be ‘fine used’ if they were soaked off the cover. Checking the latest Stanley Gibbons Part 1 catalogue, a single used 4d stamp (SG187) is currently valued at £14, so a block of four logically is £56. SG however also says at the very start of the catalogue section for Barbados, that the on-cover prices for these start from 4 times the value of the used stamp, meaning £244 as a start point. And so far we’ve only concentrated on the block of four.

Alongside this block is a single outlying stamp; a used copy of the George V 1d overprinted WAR TAX. Whilst this stamp has a far more modest used value of 75p, when added to the cover it brings about a whole different perspective.

The overprinted WAR TAX stamp came about in 1917 to support the cost to the Commonwealth of World War 1, by imposing a 1d surtax on all stamps going overseas to countries where the postage rates were 1d per oz (which in practice meant USA and GB). The stamps were only used for a short period, from October 1917 until the Postal Surtax Act 1917 was repealed at the end of March 1920. This means that all postally used copies of this stamp must have been used in a period of just twenty-seven months.

Whilst we cannot clearly make out the dates on the cancels over the Barbados stamps (though the one over the War Tax stamp looks to say 17 JAN 20), there is a tantalising glimpse of a half legible arrival cancel on the back, which suggests it arrived in London on 10th February 1920. This would make the cover an extremely late use of the War Tax stamp and a good example of how they were used, practically in postal history terms.

But if this cover had been cut up and the stamps removed, nothing of this story would remain.

More importantly, we would never know why a cover like this came to be saved in the first place, but as the original addressee is still visible, a little investigation uncovers the fact that Clifford Moss ran The Leeds Stamp Shop at 31 Woodhouse Lane, Leeds and whilst this cover is dated 1920, we know the shop was in existence beyond this as there are examples of his work still being produced in 1953. This one below is courtesy of the wonderful website GB Cover Collector which has been painstakingly assembled by its owner, Geoff.

The question, therefore, is whether the cover is philatelic or did it really see commercial use, albeit to a stamp dealer in the UK? I would favour the latter explanation, as to create a philatelic registered cover the rate would have been 2d for registration and 1d per ounce thereafter, meaning an empty cover could have been sent (including the War Tax stamp) for less than 6d. Instead, this cover was paid up to 1/5- implying that it contained something that had weight; some mint stamps perhaps?

Whatever your view on the merits of the grubby cover, I saw it as a chance to add a piece of postal history to the collection. Sure, it’s probably not worth over £200 but as it didn’t cost that in the first place, I’m not bothered. In fact, the value in this cover is not in the stamps, but in the story it tells of Barbados Postal history over 100 years ago.

The Stamps of Barbados – E Bayley

The History of the Post Offices in Barbados – E Bayley