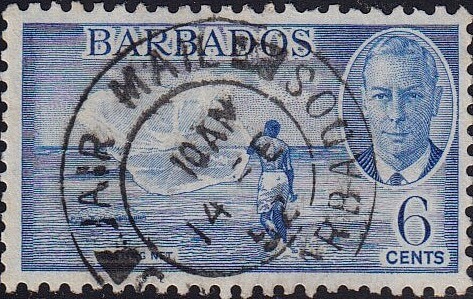 When I first started to collect Barbados stamps the initial idea was to simply get one of every stamp from the country. Of course after a short time reality started to kick in and I quickly became aware that it was an unlikely goal to get all of these stamps on a limited budget.

Notwithstanding that some of these are quite scarce and rarely come up for sale, there are other more accessible stamps that simply are priced out of my reach. Certainly for the really good copies that you would want to keep and display in a collection.

Recently however I got sidetracked into postmarks and found a whole new world of collecting which is well within the reach of a small budget.

For example this stamp probably wouldn’t make it into the main collection as the perforations are a bit hit and miss but the postmark takes it to another place. This is a good example of postmark I1 from Clarke, Radford and Cave’s 1982 book “Barbados Post Office Markings to 1981” where it appears in section 9, GPO Air Mail Department.

With only twelve parish numbers and less than 100 postmarks in total, putting together a nice collection of well cancelled Barbados stamps is not that expensive as many of them are pennies to collect. And what a nice little slice of history you will have in your collection to enjoy.