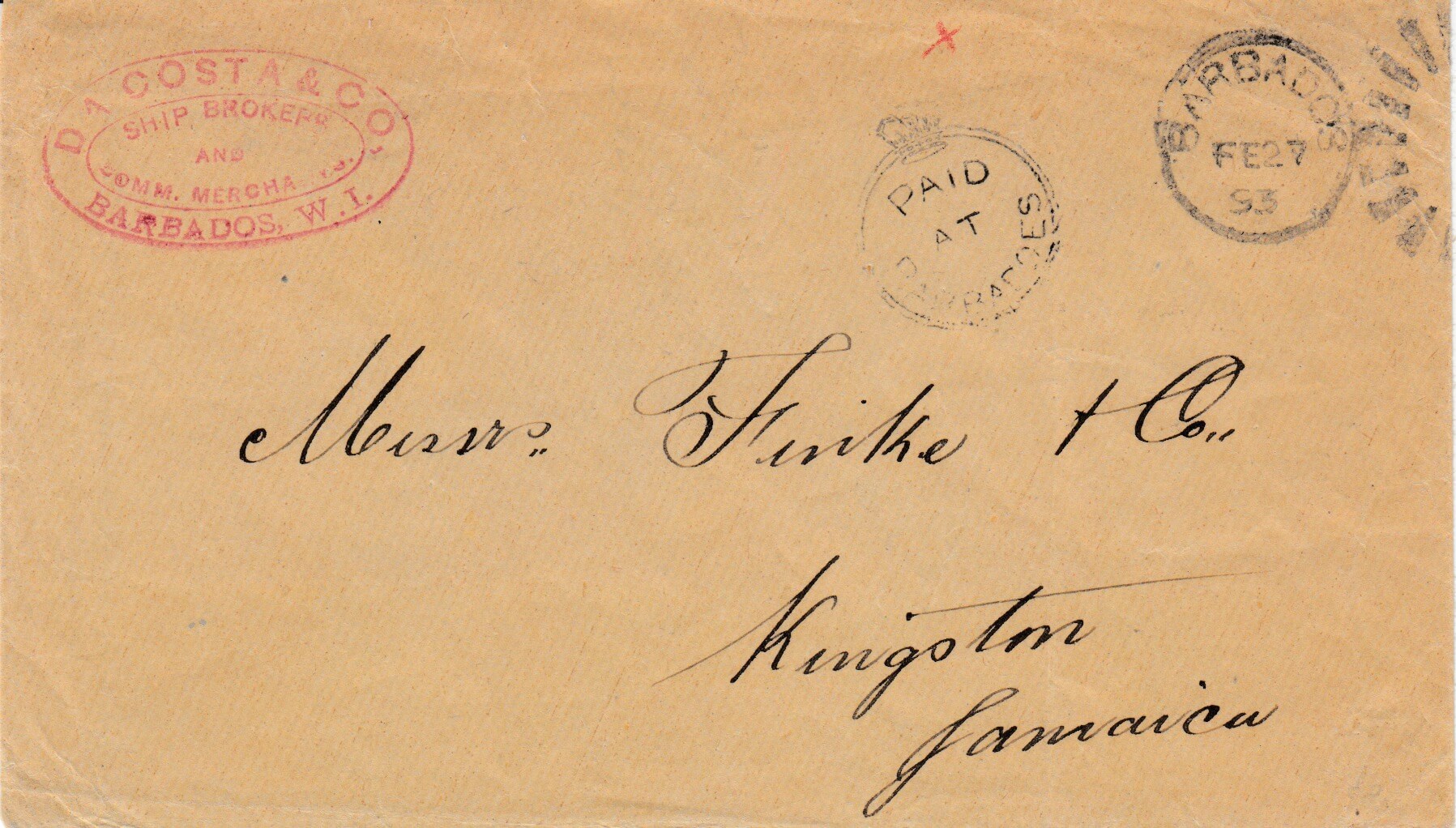 As you know, we like philatelic mysteries and this cover is just one of those.

It seems quite straightforward in that it is a Barbados Crowned Circle cover from 1893 which we collect. No mystery there.

The cover was sent from Da Costa & Co, Barbados on 27th February 1893 to Finke & Co, who were based at 56  Port Royal Street, Kingston, Jamaica. Da Costa were Ships Brokers and Commercial Merchants and Finke & Co are listed in contemporary directories as General Import and Export Merchants

The cover is cancelled with a strike of the ‘Paid at Barbadoes’ Crown Canceller in black ink, as was typical during this period. Due to a shortage of 1/2d stamps, letters sent between 17th February and 15th March 1893 were allowed to be cancelled like this, with payment made at the counter of the General Post Office in Bridgetown and the ‘Paid at Barbadoes’ strike denoting payment received. It also carries the C5 ‘Date mark plus Open Bootheel’ duplex mark which carries the date and year.

This system, however, was only authorised for internal mail within Barbados as this was the mail that would attract the 1/2d rate.

Inter Island mail like this should have had a stamp affixed to pay to the proper rate (1d for a letter this size and weight) and posted in the normal fashion. A small number of inter island covers exist however with the ‘Paid at Barbadoes’  strike on them.

Their existence raises the question as to how this might have happened.

It is possible that a Postal Clerk, misunderstanding the temporary regulations, decided to cancel overseas mail in the same fashion as internal mail. Equally, it could be that this cover (and others like this) were in a large pile delivered daily by Da Costa & Co to the General Post Office and it simply slipped through the system unnoticed as the Postal Clerk was cancelling a lot of covers in a single go.

It is also possible that this is evidence of fraud, with a Postal Worker deliberately using the Crowned Circle canceller, denoting the full postage rate had been paid and simply pocketing the difference in the rates. This could have been a single individual or someone working in collusion with a member of staff at Da Costa & Co.

Either way, these covers are extraordinary in that they should not exist but we love them!

2 thoughts on “Barbados Stampless cover from 1893 is another mystery”