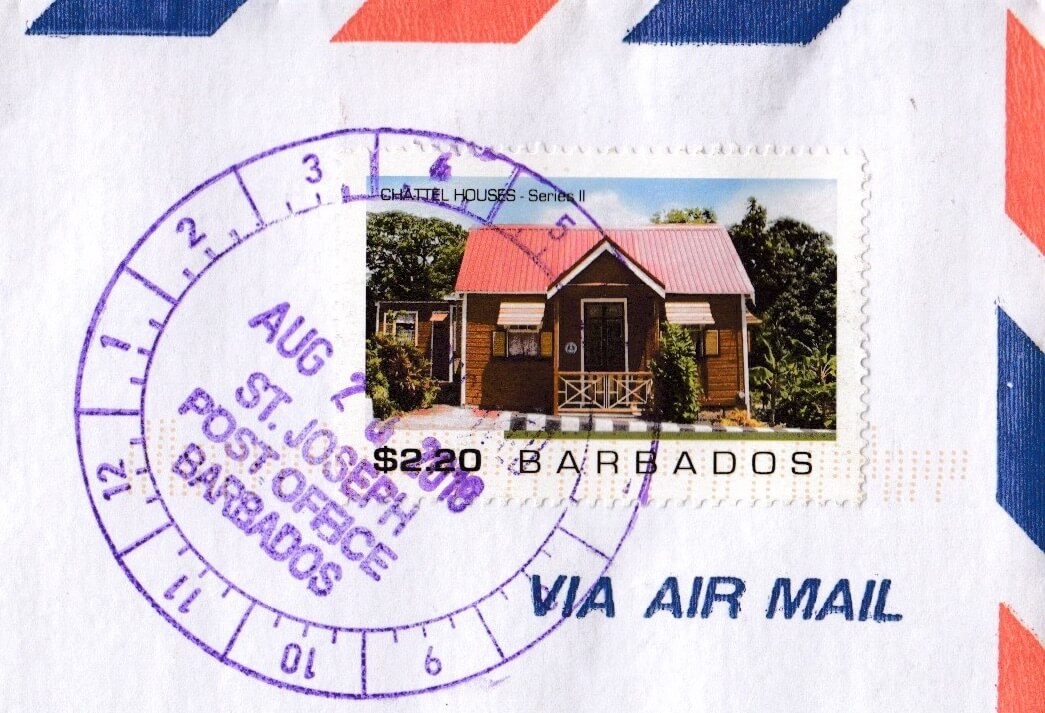 Whilst I was on the island recently I decided to test the Barbados International postal system to see just how well it works.

The plan was to drive to a remote part of the island, post a letter in a rural letterbox and see how long it took to get back to the UK.

As it turned out, the post box I found was just yards over one of the Parish boundaries so I also wanted to see if this made a difference to the postmark it received. Essentially, which main Post Office would the letter go to for cancelling? 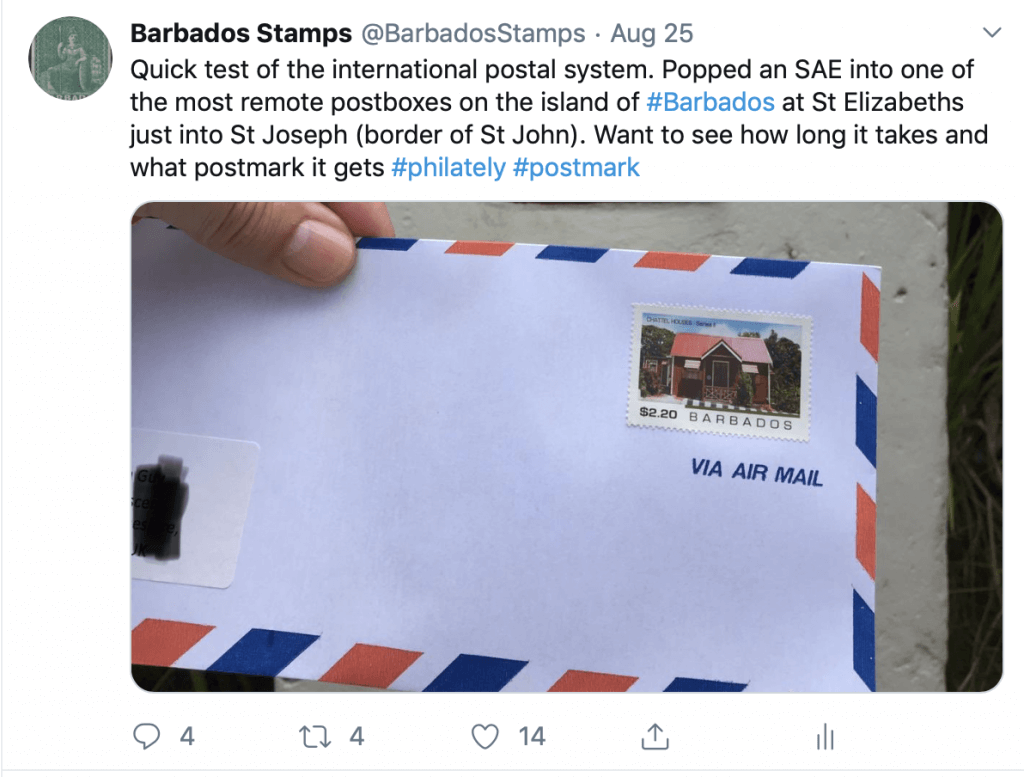 The post-box was situated just over the border of St John, into St Joseph, on the east coast of Barbados near Bathsheba. The village was called St Elizabeth and when we stopped there were just a couple of locals standing talking but nothing else apparently going on. Just another quiet day in rural Barbados.

The postbox was situated at the side of the road, set into a concrete pillar which itself was set up above the height of the road. What you can’t see from the picture below is that there are two steps leading up to it from the roadside to enable people to be able to reach the slot. 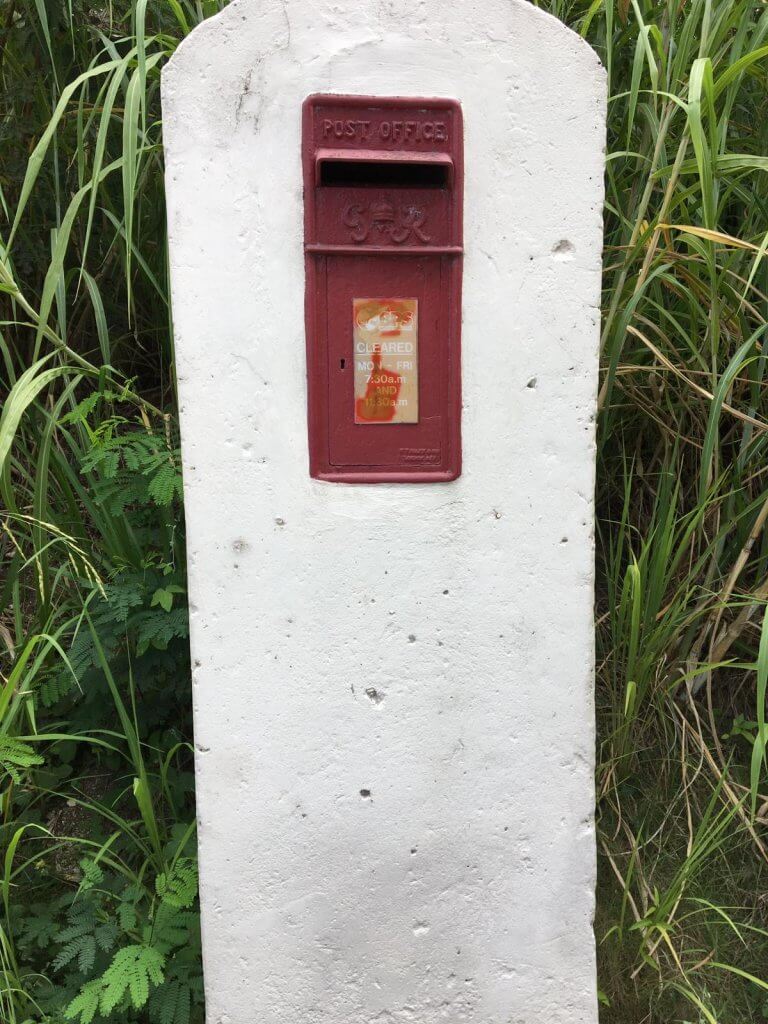 As you can see, this is a George VI postbox with the classic GR script and VI in the middle. For more details on these postboxes and to help you understand which type of letterbox you are looking at, you can visit the Letter Box Study Group website by clicking here.

The letter was posted on 16th August around 2pm and it arrived in the UK on 29th August, delivered through my door by the local postie the day after I had arrived back in the UK. In total therefore it took thirteen days to travel the four thousand or so miles from a remote part of Barbados to my front door.

The letter should have been collected from the postbox on 17th August (though this is an assumption) as the collection times noted on the front of the box are 07.30am and 11.30am.

I’m assuming it was collected the very next day but given it took thirteen days to get to my house and the normal time is seven to ten days, it’s possible it could have sat in the box for another day or two before being collected.

In fact when you examine the postmark carefully you can see that it has been cancelled at St Joseph main PO on the twenty something of August which means that it must have taken at least four days to get to the main sorting office from that postbox. The second digit on the postmark is badly smudged but my best guess is that it reads 20th August.

The question is, what happened in the intervening three days? Did it just sit in the post-box or was it collected and sat in St Joseph sorting office?

Whatever the answer, it is clear from the cancel that it was taken to St Joseph for processing and that answers one of the questions I was testing.

It seems that there is clear demarcation on the post boxes and whichever parish they are in determines the sorting office to which they are taken, certainly in the rural areas.

From St Joseph it is likely it would have travelled to Bridgetown for aggregating with other international mail and from there to the Airport and onward travel to the UK.

Given that it probably travelled to Heathrow it would have passed through one of the London sorting offices before arriving at my local office for delivery.

So, the conclusion of the test is that firstly, post boxes in rural areas appear to be strictly aligned to parish boundaries. Secondly, there is no guarantee of daily collections from rural post boxes. Third, international mail from Barbados, despite the time delays, is great value for money!

Despite the recent cutbacks in the service, the BPS remain a thoroughly professional service and provide excellent value for money. Even with the recent ‘austerity’ measures on the island, the cost of postage has not increased making Barbados postage amongst the best in the world.

One thought on “Super postmark from the remotest part of Barbados!”