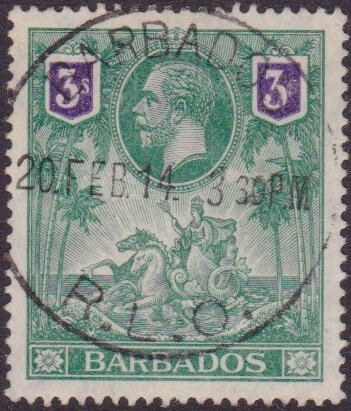 High value stamps from any era can be hard to obtain, even more so in great condition. Which is why I was so pleased to find this one recently; they don’t get much better than this.

Issued in1912 this high value stamp was in service for just four years before being superseded by the Large Seal 3/- SG191 and then SG200 which we have on the home page.

As you can see this was used at the Registered Letter Office in Barbados on 20th February 1914 at 3.30pm in the afternoon and probably served to send a large letter or parcel.

In 1914 three shillings was a lot of money and very few people would have had that much money available to use a stamp like this.

There were two printings of this stamp; one in 1912 and another in 1913 but the total number of stamps available for postal use was never more than 7,200.

Personally I have held out for three years looking, for a really good used specimen because so many of them had heavy or smudged parcel cancels, or ended up with damaged perfs having done their service on the outside of a large parcel.

So finally a gap in the collection is filled and with a perfect ‘socked on the nose’ cancellation. That’s one more towards getting all of Barbados mint and used!