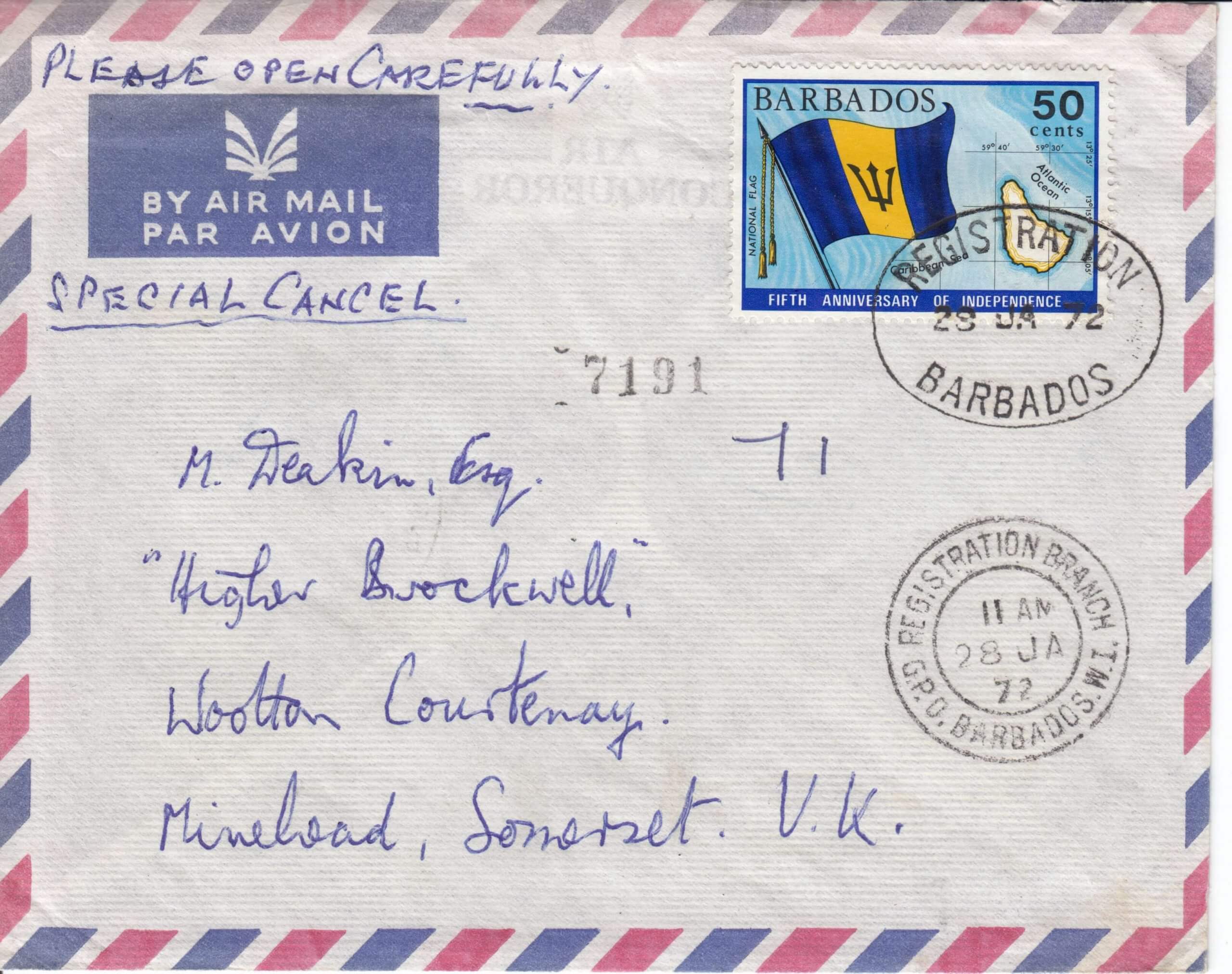 This cover was recently offered for sale on a well known online auction website, and as soon as I saw it I knew it was interesting, though I didn’t know why. I decided there and then to bid on it and see if I could add it to my growing collection of Barbados covers.

At first glance, the thing that intrigued me was the ‘REGISTRATION BARBADOS’ oval cancel across the stamp, as I’d never seen that particular cancel on a stamp before. For that reason alone I placed a bid and walked away.

One week later, it turned out I had won, and now it has arrived I’ve had time to do some research and it has revealed an interesting story.

The cover is a standard air mail envelope, typical for the time, and has been sent from Barbados to Minehead in Somerset on 28th January 1972. In the top left hand corner the sender has written “Please open carefully” and underneath the printed Air Mail etiquette they have written “Special Cancel”. I could see that from my first glance, but I didn’t realise how special.

It is addressed to M Deakin Esq. and that was the first clue of what the cover was. Whilst I don’t know who M Deakin was or is, I do know that one of the most famous collectors of Barbados Stamps was the late Frank Deakin, who formed possibly the best ever collection of this country’s stamps and covers. Given that he lived in the South West of England I have to assume that this was one of his relatives, perhaps his son?

The stamp is the 50c top value from the 5th Anniversary of Independence set, issued on 23rd November 1971, and is the correct stamp for the period. The cover, however, is overpaid by 5c as the rate for that period was 35c for an airmail letter to the UK with an additional 10c for Registration. On that basis, the cover is philatelic, but we could already see that from the notations about the special cancel.

The lower of the two cancels on the cover is a clear Registration Branch cancel (J8)* which is dated and timed as 11am 28 JA 72. The upper cancel, however, is an oval saying ‘REGISTRATION BARBADOS 28 JA 72’ (J12) and has been used to cancel the 50c stamp. The cancel has been repeated on the back of the envelope to ensure there is a clear mark.

According to Clarke, Radford & Cave, this particular cancel was only supposed to be used as a back cancel and was not actually designed to cancel stamps. It is, however, recorded as having been used as such and the earliest known date (EKD) for this is 28th January 1972.

Which makes this the earliest known cover using the oval ‘Registration Barbados’ cancel to cancel a stamp.

Now, it may be that there are others out there like this, but until I can find one then I am going to assume that this was the cover which they used to determine the EKD for the book.

So, it turns out that this cover tells quite an interesting story and I now need to find out more. For example, who was or is M Deakin Esq? Who sent the cover to him, was it his father? Was it one of the Bayley’s, famous Barbados stamp collectors and dealers, who were in regular correspondence with Frank Deakin throughout his collecting?

And this is why covers are so important. The used 50c stamp on its own is valued by Stanley Gibbons as £1.60, and can be bought for pennies in lots of places. But still affixed to a cover like this, its value is immense.

Cancels J8 and J12 are noted Registration Branch marks in the book.