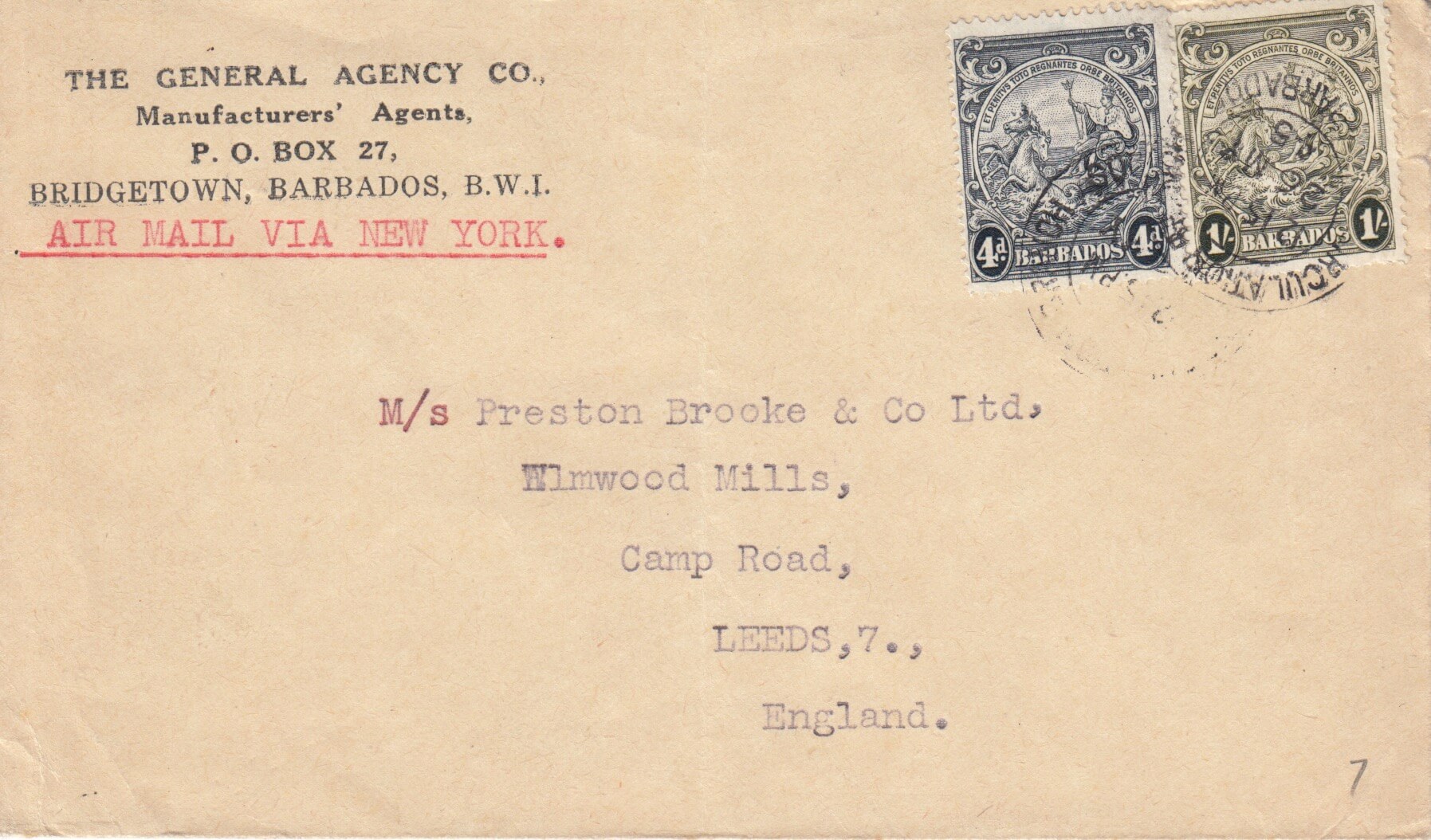 Last weekend, at York Stamp & Coin Fair, I managed to pick up a treasure trove of covers. So many, in fact, that I will be working through them for weeks to come. Most were for pennies and a few for a little more than that, as most were fairly standard commercial mail. There is no shortage, for example, of covers from the period 1939 – 1947 which carry the George VI Badge of the Colony definitive set.

When I pick up covers these days I’m looking for nice clean covers that are paying the correct rate for the date and destination. This isn’t difficult as there are a lot of them around. The reason for this is that I have managed to put together a nice little display of the stamps and varieties from this set and I’m filling out the display with a selection of covers that fit the period. Whilst it’s nice to show off the stamps, postally used covers, I feel, give a little more to the story. After all, these ‘adhesive labels’ were produced for a reason and that reason was to facilitate to transport of mail from one place to another. It’s great, therefore, to find examples where they have been used to do just that.

This brings us to the cover below. As you can see from the image, it’s just a normal everyday cover from Barbados to Leeds in 1945, going airmail via New York. It has two stamps making a total of one shilling and four pence and this pays the correct airmail rate. There’s nothing on the back of the cover so everything that you need to understand why it is special is on the front.

I picked this up because it was in a dealer’s box right next to another cover from the same people to the same address. Preston Brooke & Co was a Leeds based wholesale clothing manufacturer and had been in business since the late nineteenth century. They moved the Elmwood Mills premises in 1905 and were amongst a group of clothing companies in that area that grew and thrived on the export of cloth from Yorkshire. As the times changed and manufacturing and production started to shift to the Far East, the area declined and the firm closed its doors in the 1970s.

I thought, therefore, that I was getting just a decent cover paying the 1/4d rate from Barbados to Leeds in 1945, but something made me look a little closer when I got the cover home.

What I thought, at first glance, was a smudge from the postmark, turned out to be one of the known and listed errors on this stamp, the Flying Mane flaw.

Of course, when it’s blown up like this it’s quite easy to spot, but to find it used on the cover is quite a rarity. The next question, having spotted this is which stamp is it, the earlier printing with the 13½ x 13 perforation, or the later printing with the 14 x 14 perforations. The first clue which made me think it might be the later printing was the date of the cover. The cancel is almost unreadable without a magnifying glass, but under closer inspection, it was dated 25th May 1945. The perf 14 stamp was only issued in 1944 and the entire series was superseded in 1947, so it had a limited shelf life, but the later date of this cancellation gave me hope that it was the perf 14 version. Sure enough, on inspection with a perforation gauge, it was the perf 14 stamp, making it SG253da.

For me, this was a tremendously important find as I have never seen this stamp actually used on cover. It’s a scarce item anyway, just as the normal stamp, but to find it still attached to a really nice cover, that’s the thing that all collectors hope for when they spend hours going through boxes of covers.

The cover has now found a nice new home in my display of these stamps and will, I’m sure, be getting an outing in the near future when the stamp society meetings start up again. It just goes to show, that what appears to be a fairly ordinary cover can sometimes hold a secret that is just waiting to be discovered.