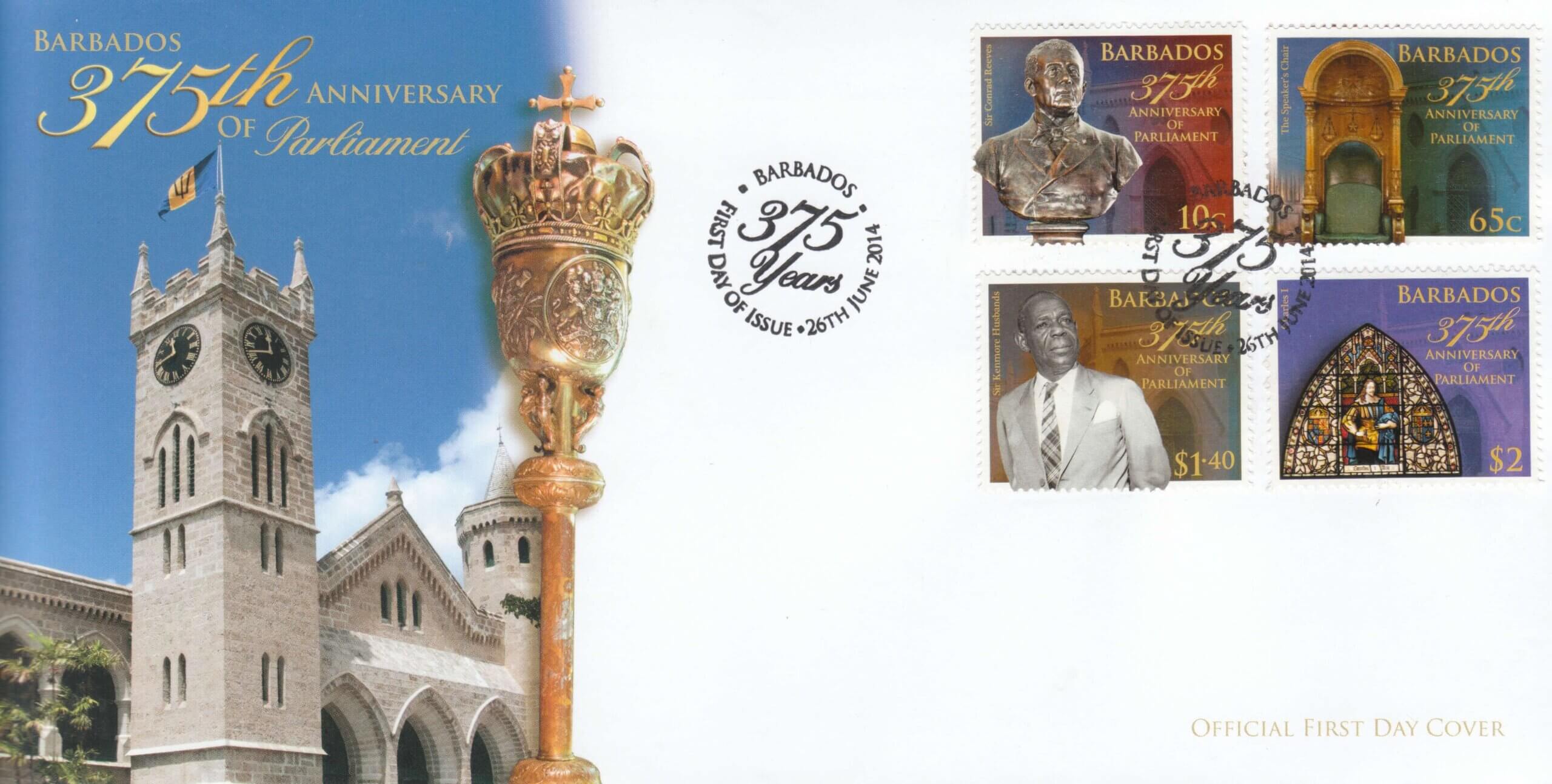 On 26th June 2014 the Philatelic Bureau in Barbados issued a new set of stamps to commemorate the 375th Anniversary of Parliament in Barbados.

The stamps are as follows; 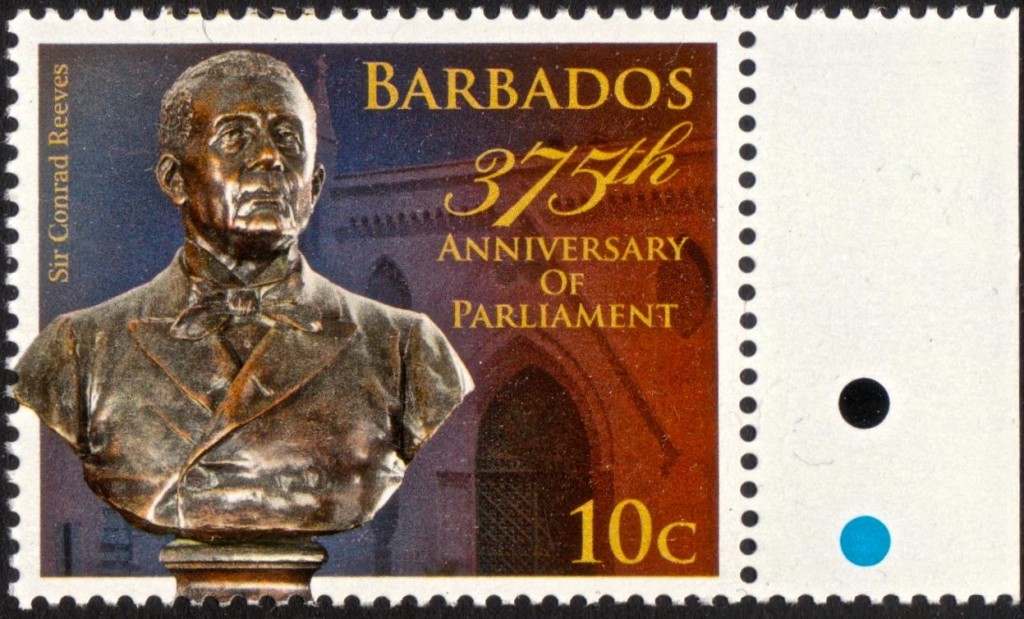 Sir Conrad Reeves is notable for a number of reasons not least is his ‘saving of the constitution in the 1870’s’, being the first local Chief Justice of Barbados and becoming the first black person to be knighted.

In common with records of that era there is some dispute over his actual dates of birth and indeed death. Records show him being born in 1838, 1827 and even 1821 and that he died on 8th January 1902 although there is a copy of the Boston Evening Transcript dated February 10th 1902 that states that he passed away ‘last Wednesday night’ suggesting that he actually passed away on 5th February. The leaflet accompanying the stamps has his dates simply as 1821-1902. 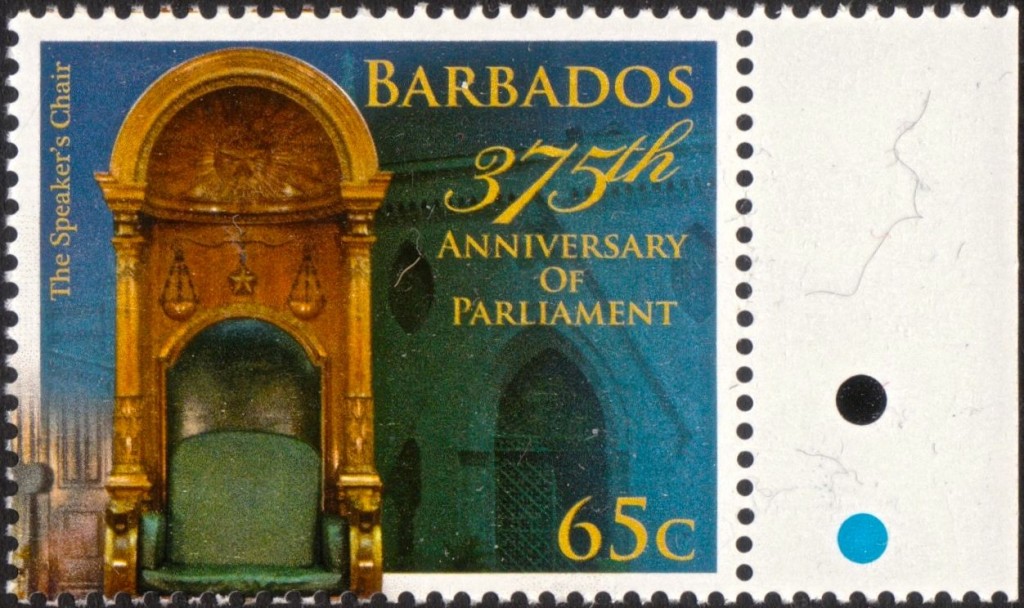 A gift from the Governor of India to the people of Barbados, the chair symbolizes authority in Barbados. It was gifted to mark the attainment of the Country’s Independence on 30th November 1966 although not presented until 1968.

The chair is made of teak from Central India and it took twelve craftsmen a year to complete all the ornate carvings on it. 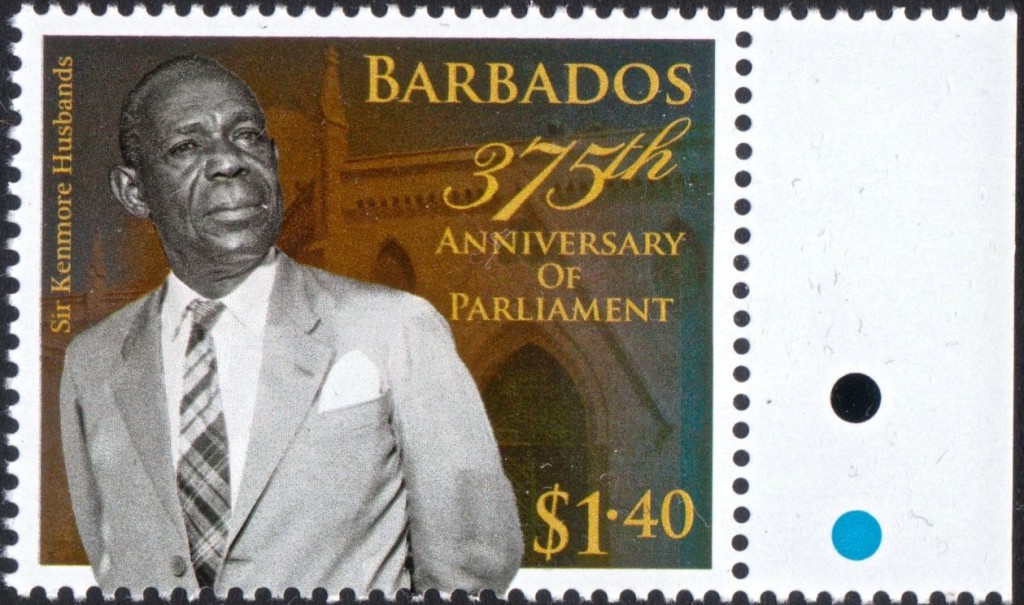 Originally a teacher in a number of local schools, Kenmore entered politics in 1946 when he became candidate for the parish of St James. In 1947 he actually won the seat in a by election and then contested the General Election of 1948 when he was duly elected by the people of the parish.

Six months after this win he became the first black speaker of the House of Assembly in Barbados, which he held until 1955, and then again from 1958-61.

He also held the positions of Minister of Agriculture, Science & Technology, then later Minister of Trade, Industry and Commerce.

He represented his constituency from 1948 until he retired in 1971. Sir Kenmore Nathaniel Rhystone “Doc” Husbands was made a Knight of St Andrew in 1989 and died in 1991. 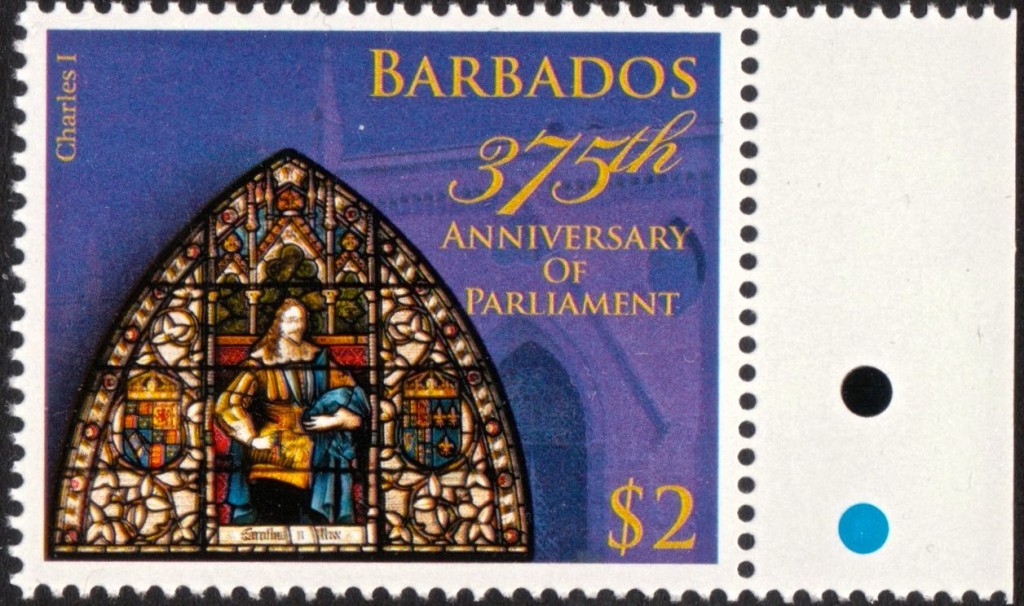 This stamp depicts the stained glass window, which sits in the East Wing of the House of Assembly. It shows British Sovereigns from 1603-1636 but as the island was colonized in two tranches in 1627 and 1628 it was colonized during the reign of Charles I.

He in turn granted a charter to James Hay, the Earl of Carlisle, The Lord Proprietor of Barbados giving him authority to establish a settlement and make laws for any free men of Barbados.

Whilst Charles I attempted to rule absolutely in England the island continued to be run by the Earl of Carlisle but on Charles’s execution by Oliver Crowell in 1649 rule on the island moved to the Parliament.

Of all the stamps in this set this one is perhaps the most disappointing with the litho printing simply not up to the job of capturing the detail required to show off the window. There may have been some registration problems with this batch but the colours appear to be offset slightly resulting in a blurred looking image. 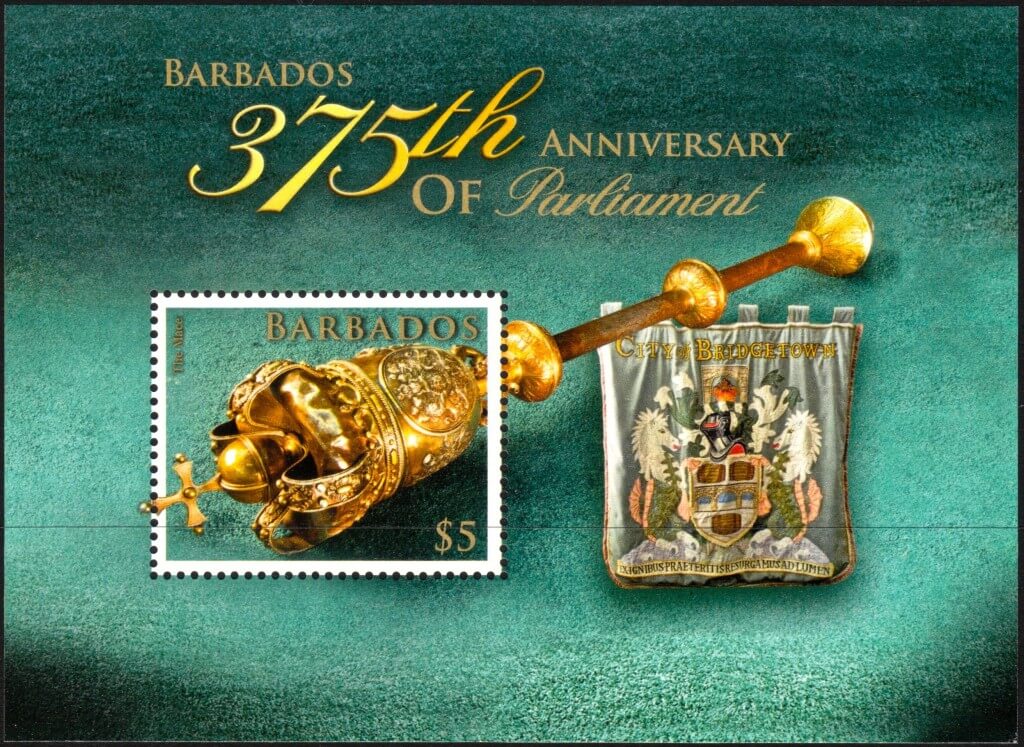 If the $2 stamp is a disappointment it is made up for in part by the detail in the $5 mini sheet.

Comprising a stamp, set within a mini sheet, it is designed primarily for collectors and will see little if any postal usage.

It features the Mace, which was originally a symbol of authority and carried by the Kings Serjeant at Arms and was imported from England in 1810 following a resolution from Parliament.

Very similar to that used in the House of Commons in the UK, it is made of silver gilt with an orb and cross at its head.

The Coat of Arms of Bridgetown which also features on the mini sheet (but not on the stamp within the sheet) was granted to Bridgetown in September 1960 and is an ornate depiction of the historic past of the city, founded on sugar and molasses, and often torn apart by fire.

It contains a motto which translates as “from the flames of the past move forward to the light”.

This is not a bad set and although the stamps are quite dark this reflects I suspect the rich ‘royal’ colours of purple, green, red and gold. The First Day Covers are a simple picture of the Clock Tower at the West Wing of the Parliament Building, one showing the Mace and one without. 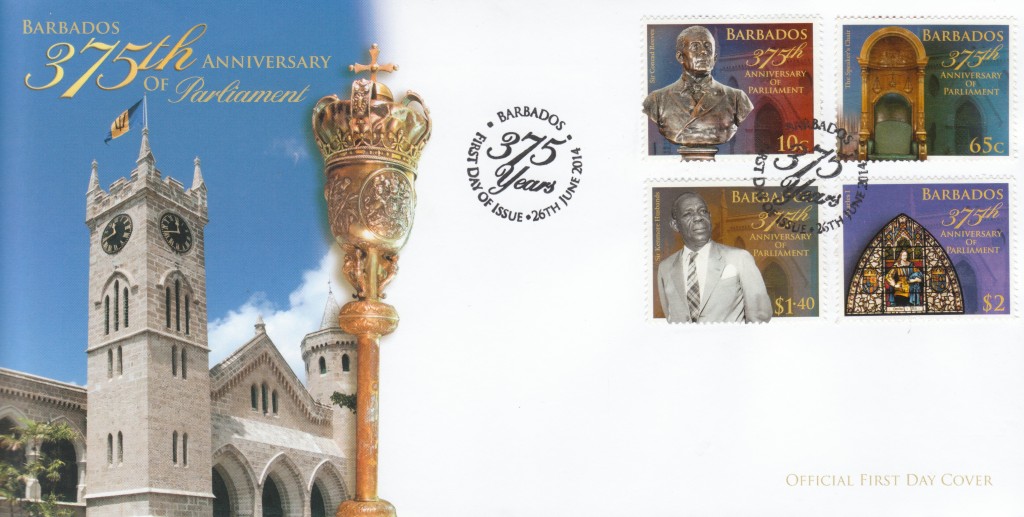 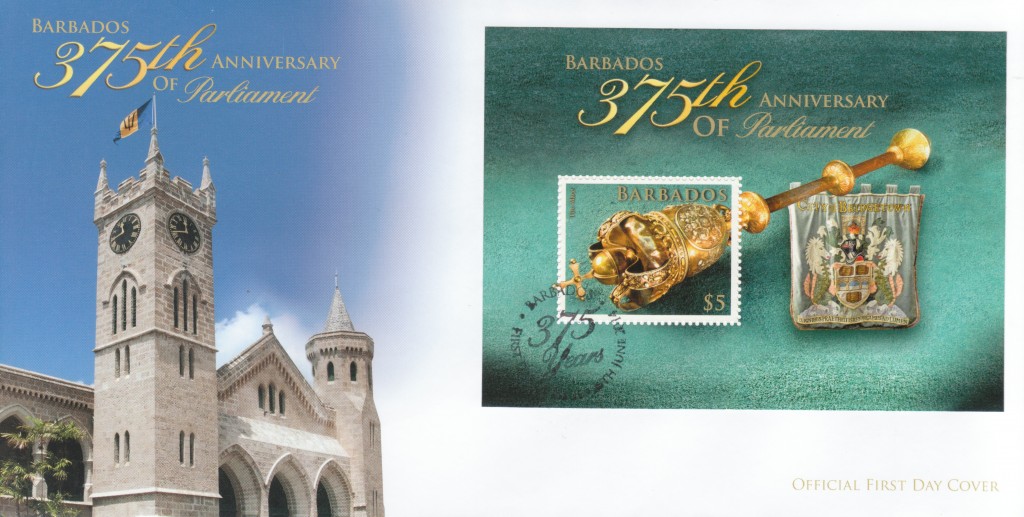 So a set with good local and historical interest, it celebrates local lives and deeds and has a strong relevance to the country today. Whilst some of the printing is not quite as good as it might be the set itself is a worthy addition to the catalogue.

If you want to find out more about the Parliament then you can visit the Barbados Parliament website.