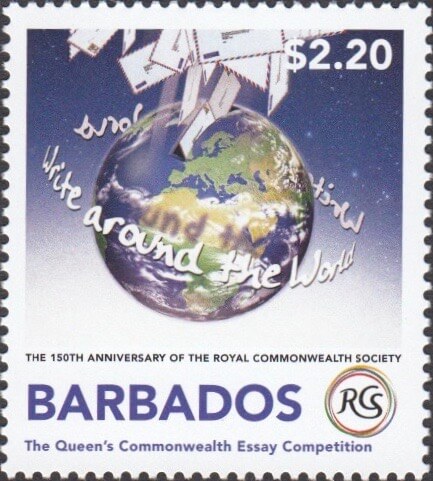 The 150th Anniversary of The Royal Commonwealth Society

Just before Christmas 2018, on 20th December, Barbados issued only their second set of stamps for the year and the final issue of 2018.

Founded in 1868, The Royal Commonwealth Society is a network of individuals and organisations committed to improving the lives and prospects of Commonwealth citizens across the world.

Through youth empowerment, education and advocacy, The Royal Commonwealth Society promotes the value and the values of the modern Commonwealth.

They champion human rights, democracy and sustainable development through their international networks and across the fifty-three member states (now 54 in 2020)  which are intrinsically linked through their common history and shared values.

The Society is a charity and has Her Majesty The Queen as its Patron and their aim is to engage all citizens of the Commonwealth.

The stamp issue features just four single stamps and a souvenir sheet, and centres on activities on Barbados which involve The Royal Commonwealth Society.

The issue is unusual as it manages to combine both the 150th Anniversary of The Royal Commonwealth Society as well as including the theme of Christmas; quite timely when the stamps are issued on 20th December.

The stamps are as follows;

Commonwealth Day is the annual celebration of the Commonwealth of Nations and it is held on the second Monday in March every year.

It provides an opportunity for individuals, communities and organisations to promote the shared Commonwealth values of peace, democracy and equality and to celebrate the associations’ rich diversity.

The day is marked with a multi-faith service celebrating the unity, diversity and linkages of the modern Commonwealth and to foster greater understanding of the Commonwealth’s achievements and role, particularly amongst young people.

The Queen’s Commonwealth Canopy is a unique network of forest conservation initiatives involving all fifty-three member states in the Commonwealth.

The project links Commonwealth countries through the conservation of all types of natural forest and indigenous vegetation for future generations, demonstrating the capacity of the Commonwealth to act collectively, share best practice and create new initiatives.

The Annual Christmas Tree Project, Christmas in the Square, is designed to bring beauty and cheer to Historic Bridgetown during the Christmas season through the placing of ten foot tall illuminated Christmas trees in Independence Square, around the Inner Basin of the Careenage, Heroes Square, Fountain Gardens, Jubilee Gardens and at the General Post Office Amphitheatre.

The RCS Barbados branch designed the project which is executed each year in association with the Barbados Defence Force, the Barbados Cadet Corps and the Barbados Youth Service.

Each tree is decorated using natural handcrafted decorations, using as much recycled material as possible and every tree is individually dedicated to a member country of the Commonwealth, topped with a flag of the country which is being depicted.

The Commonwealth Essay Competition is the worlds oldest schools’ international writing competition and has been managed by the RCS since 1883.

Every year it allows young persons under the age of 18 to present an essay on their hopes for the future, opinions of the present and thoughts on the past.

The competition is used by individuals and teachers to build confidence, develop creative writing skills of young people and to support creativity and critical thinking.

There is also a Souvenir Sheet to support this issue and it features a photograph of the Harbour in Bridgetown at night, lit up with Christmas trees representing some of the different countries of the Commonwealth.

As always, there is a First Day Cover of this issue and it depicts a carved wooden statue of a family of two adults and two children with a globe inside the family unit, depicting global unity.

Our verdict on these stamps is that they are, as always, on a subject both close to and relevant to Barbados and as such they are a welcome addition to the catalogue. Whilst the Souvenir Sheet won’t get a great deal of postal use, the stamps most definitely will.